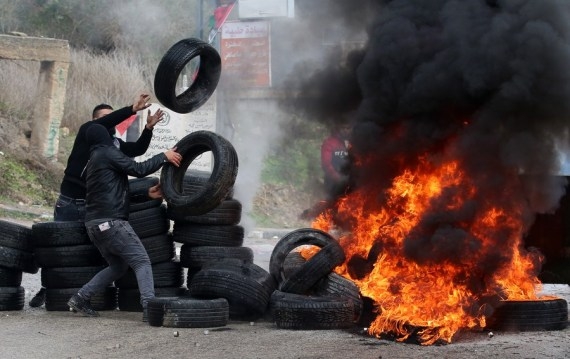 Ramallah : Dozens of Palestinian protesters were injured during clashes with Israeli soldiers in West Bank, medics said on Saturday.

The clashes broke out near the West Bank city of Ramallah on Friday, reports Xinhua news agency.

A local journalist was shot and wounded by Israeli soldiers and dozens of protesters fainted after inhaling the tear gas fired by the soldiers, medical sources said.

Separately, fierce clashes broke out between Palestinians and Israeli soldiers near the villages of Beita and Beit Dajan, south and east of the northern West Bank city of Nablus.

Ahmad Jibril, the head of the Emergency and Ambulance Department at the Palestinian Red Crescent Society, told Xinhua that 15 protesters were shot and wounded by Israeli soldiers, including three who were shot in the head by rubber-coated metal gunshots in Beita.

He added that 12 other Palestinians were shot and wounded by live ammunition and dozens of them inhaled tear gas during the clashes in Beit Dajan.

Beita and Beit Dajan have seen weekly protests against the expansion of Israeli settlements in the two villages and clashes with the Israeli soldiers.