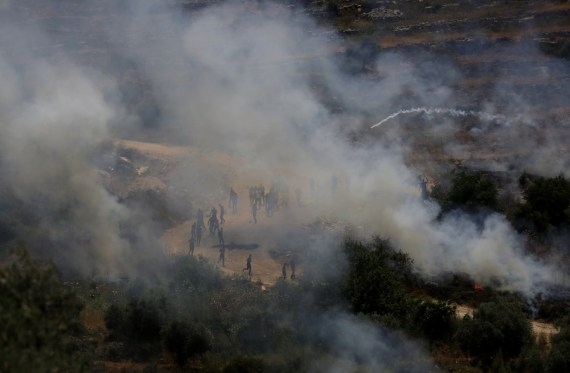 The Palestinian Red Crescent Society said in a statement that its medical crews treated 33 protesters who were injured by Israeli soldiers during the clashes in the village of Beita, south of the northern West Bank city of Nablus, reports Xinhua news agency.

The statement said two were injured by rubber-coated metal gunshots, and 31 suffered suffocation after inhaling teargas fired by the soldiers, adding that Israeli soldiers opened fire at one of the ambulances in the area.

Over the past three months, the village of Beita has been witnessing daily clashes with the Israeli soldiers in protest against the establishment of a settlement outpost close to the village and confiscating parts of its land.

Meanwhile, Murad Ishteiwi, the coordinator for the Palestinian popular protests, said that eight Palestinian protesters were injured by Israeli soldiers and dozens suffered suffocation after inhaling teargas near the town of Qalqilya.

He said the clashes broke out during rallies that the Palestinians organise every Friday afternoon in protest against Israeli settlement and confiscation of Palestinian-owned land.