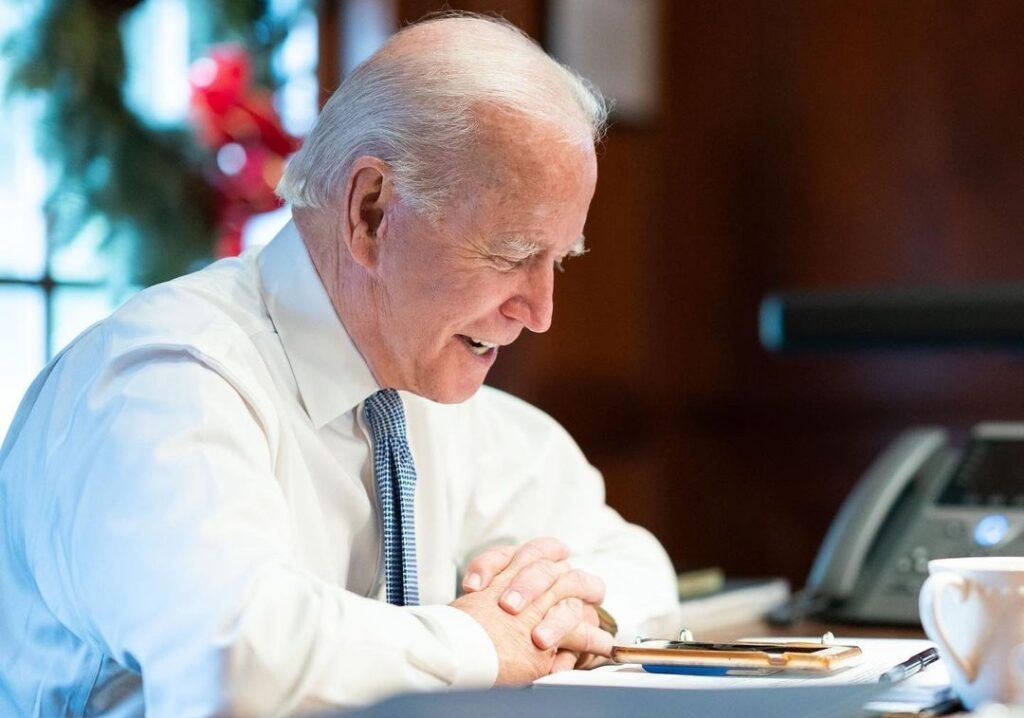 Washington, US President Joe Biden on Wednesday night addressed a joint session of Congress for the first time, rolling out his administration’s two top priorities in a sweeping legislative agenda — the American Jobs Plan and the American Families Plan — while touting his achievements on the eve of his 100th day in office.

For the first time in US history, two women were seated directly behind the president on the dais: Speaker Nancy Pelosi and Vice President Kamala Harris, the Xinhua news agency reported.

The American Jobs Plan, a planned investment of $4 trillion in building climate-friendly infrastructure such as roadways and broadband, would be guided by one principle, ‘buy American, buy American,” said Biden, pledging that the plan would create “millions of good paying jobs” and be the biggest increase in non-defence research and development on record in the US.

“Throughout our history, public investments and infrastructure have literally transformed America. These are investments we made together, as one country, and investments that only the government was in a position to make. Time again, they propel us into the future,” Biden said.

The American Families Plan will add two years of universal high-quality pre-school for every three- and four-year-old in America, increase Pell Grants and investment in historically black universities, tribal colleges, and minority-serving institutions, provide up to 12 weeks of paid family and medical leave, ensure low- to middle-income families pay no more than 7 per cent of income to care for their children up to the age of five, and expand the child tax credit for every child in a family.

To finance the two plans, Biden said he had no intention of raising the deficit or imposing any tax hikes on people making less than G households.

“It’s time for corporate America and the wealthiest 1 per cent of Americans to pay their fair share,” said Biden, citing a study which found that “CEOs make 320 times what their average workers make.”

“The pandemic has only made things worse,” the president continued. “Twenty million Americans lost their jobs in the pandemic, working-and middle-class Americans. At the same time, the roughly 650 billionaires in America saw their net worth increase by more than $1 trillion.”

“It’s time to grow the economy from the bottom up and middle-out,” Biden announced.

However, the two plans face a deeply uncertain fate in Congress, where Democrats hold only a slim majority in both the House and the Senate, analysts say.

The president urged Congress to pass legislation on immigration reform, gun safety, the 15-dollar minimum wage, equal pay for women, as well as expanded protections for members of the LGBTQ community.

He also called on lawmakers from both parties to “find consensus” and pass policing reform by the anniversary of African American George Floyd’s death next month. The plans face an uphill battle and will require the support of at least some Republican senators.

In his address, Biden touted his achievements such as pushing his $1.9 trillion coronavirus relief package through Congress and getting more than 200 million coronavirus vaccine shots within his first 100 days. He also pushed for actions on lowering drug prices and expanding Medicare benefits.

“I was not overly inspired,” said moderate Republican Senator Lisa Murkowski. “I think he wanted to make sure we knew all of the ins and outs of his various plans. I was looking for more of an uplifting and outreach on the bipartisan note that we heard from the inauguration speech.”

Senator Tim Scott, who delivered the Republican rebuttal to Biden’s address, argued that the administration’s plans on spending and tax hikes would weaken the US economy.

“The actions of the President and his party are pulling us further and further apart,” Scott said.

The event was limited to an attendance of 200 people in a locked-down Capitol, instead of the usual 1,600, due to strict security and health restrictions, media reported, adding that Chief Justice John Roberts will be the lone member of the Supreme Court on hand.

The address has been delayed for months. Newly inaugurated presidents generally deliver an address to Congress within weeks of taking office, but Biden has not done so due to the Covid-19 pandemic, said media reports.