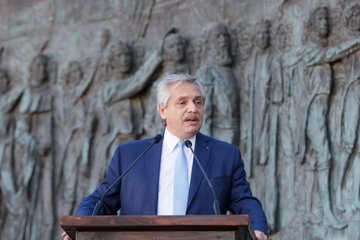 Buenos Aires : Argentine President Alberto Fernandez has stressed on the importance of voting in the Primary, Open, Simultaneous, and Mandatory polls (PASO), in which citizens choose the candidates that will face off in the legislative elections scheduled for November 14.

“I have fulfilled my duty to vote. It is a beautiful day, because every time we vote in Argentina, we make democracy a little stronger, and for me, that is very important,” the President said after casting his vote here on Sunday.

A total of 101,457 ballot boxes have been open for voters in 17,092 electoral establishments, which have reported long lines and delays due to Covid-19 protocols.

The winners of the primaries will be able to compete in the legislative elections, in which 127 of the 257 seats in the Chamber of Deputies and 24 of the 72 seats in the Senate are up for grabs.

The National Electoral Chamber reported that as of Sunday afternoon, 36 per cent of the electorate had voted.

The primary elections were implemented in 2011 with the aim of allowing each party to define who appears on their candidate lists during the national legislative elections.