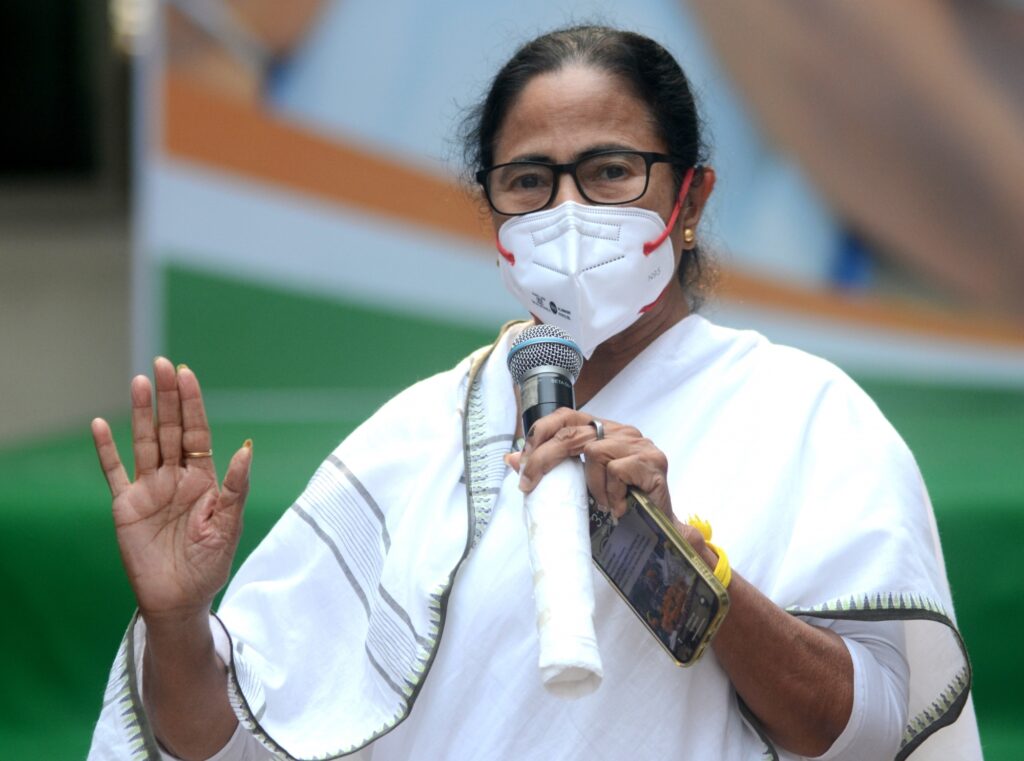 Kolkata: Mamata Banerjee after taking her oath as West Bengal CM for the third consecutive time in an unembellished function at the ‘Throne Room’ in Raj Bhavan in Kolkata on Wednesday morning announced that handling the Covid situation in the state and tackling post poll violence and the overall law and order situation in the state will be her priority.

The chief minister’s convoy left her residence at Harish Chatterjee Street popularly known as Kalighat at 10.10 a.m. and reached Raj Bhawan at 10.20 a.m. Like any other day she sat by the side of the driver but the usual scene of people standing by the side of the road to have a glimpse of the chief minister was missing because she had requested everybody to stay indoors. Though the curious eyes were absent but the entire road was decorated with blue-white — the colour combination branded by Trinamool Congress and large footballs — highlighting the party’s theme song — ‘Khela Hobe’ (We will play).

The oath taking ceremony started after Governor Jagdeep Dhankar entered the hall at 10.44 a.m. and his entry was followed by the national anthem. The ceremony started at 10.45 a.m. and lasted for seven minutes where Mamata Banerjee took her oath in Bengali.

Speaking to the media after that the chief minister said, “I shall start my work from today only. I shall go to Nanbanna and do a high-level meeting on the Covid situation in the state. We need to review the situation and several measures will be announced in the evening. We hope we will be able to control the situation as we did before”.

“I would also like to take this opportunity to appeal to all people and workers of all political parties to maintain peace and harmony. Bengal has a culture and we should not forget that. There are some sporadic incidents. I have got information but the administration was not in my hand for the last three months. I assure everybody to take necessary action and handle the situation strongly but before that I would like to appeal to everybody to stay in a peaceful manner,” she added.

Ghosh had told the media that he decided to quit the oath taking ceremony because a lot of the BJP workers are being killed all over the state in post poll violence. State Congress President Adhir Ranjan Chowdhury said that he didn’t receive any invitation letter from the government.