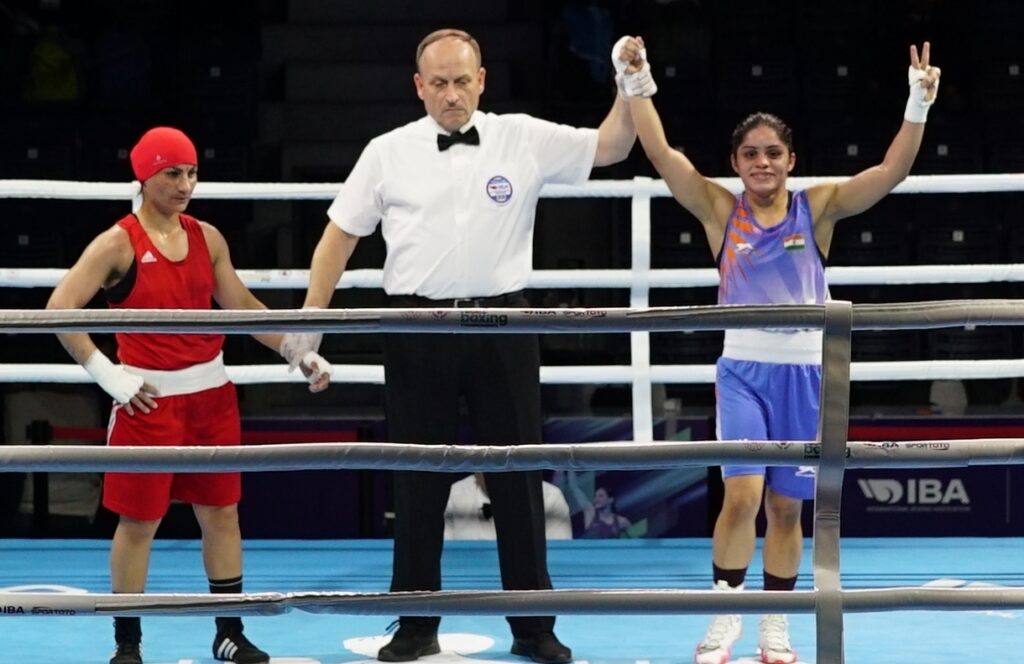 Istanbul (Turkey) : Indian boxer Anamika showed her prowess and technical superiority in the 50kg weight class to advance to the pre-quarterfinals at the 12th IBA Women’s World Boxing Championships, defeating Romania’s Eugenia Anghel by a unanimous decision, here on Thursday.

The bout started on an aggressive note as both the boxers relentlessly attacked from the word go but Anamika used her sharp footwork and movement to land clear punches and evaded her opponent’s attempts.

The boxer from Rohtak continued her relentless attack in the second round and didn’t let her opponent settle down. She dictated terms throughout the bout and comfortably won by a 5-0 margin to move to the next round.

Anamika will next face World Championships bronze medallist, Kristy Lee Harris of Australia, in the Round-of-16 bout on Sunday.

Later tonight, two other Indian pugilists- Shiksha (54kg) and Jaismine (60kg) are set to begin their challenge at the prestigious tournament, which has been witnessing high voltage competition in presence of record 310 boxers from 73 countries across the world.

This year’s event, which marks the 20th anniversary of the IBA Women’s World Championships, will be played till May 20.

Shiksha will be up against Argentina’s Herrera Milagros Rosario in the 54kg opening round match whereas Jaismine (60kg) will square off against two-time Youth Asian Champion Porntip Buapa of Thailand respectively.

Two-time Asian Champion Pooja Rani (81kg) and Tokyo Olympic bronze medallist Lovlina Borgohain (70kg) will play their respective round-of-16 bouts on Friday. Pooja, who will begin her World Championships campaign, will take on Hungary’s Timea Nagy while Lovlina will fight against Cindy Ngamba of the Fair Chance Team. Lovlina had defeated former world champion Chen Nien-Chin in the first round on Monday.

Late on Wednesday, India’s Saweety (75kg) went down fighting against England’s Kerry Davis and lost the bout by 2-3

In the last edition of the tournament, held in Russia in 2019, Indian boxers secured one silver and three bronze medals.