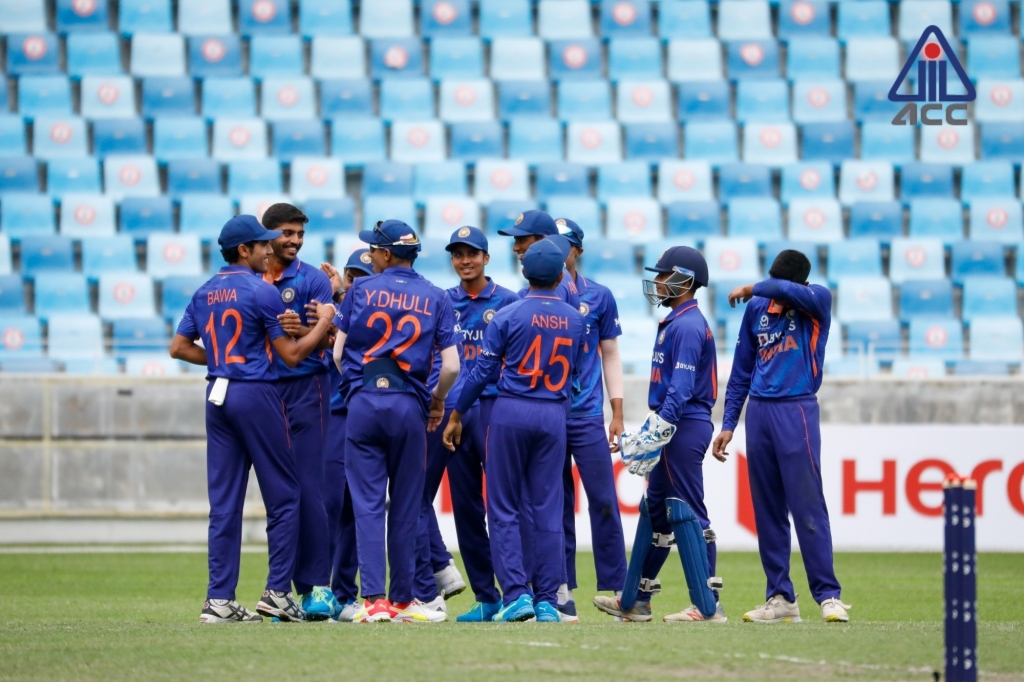 Dubai : An outstanding show by the bowlers followed by an unbeaten half-century from opener Angkrish Raghuvanshi led India to an easy nine-wicket win over Sri Lanka in a rain-hit final of U19 Asia Cup at the Dubai International Stadium here on Friday. The win also meant that India clinched the U19 Asia Cup trophy for the eighth time out of nine editions.

After restricting Sri Lanka to 106/9 in 38 overs, India had to chase 102 in the same allotted overs. Sri Lanka struck an early blow as Harnoor Singh was trapped plumb lbw by Yasiru Rodrigo for just five. But his partner Raghuvanshi, who was hit early on the helmet, was unfazed in shot selection. He got his first boundary of the match with a lovely backfoot punch and followed it with a pull over square leg.

His partner Shaik Rasheed kept the scoreboard ticking by rotating the strike and hitting a boundary. The duo’s efforts meant that they brought up the half-century of their stand for the second wicket. After that, Raghuvanshi brought out his stroke-play, smashing boundaries while using his feet, and found gaps with ease.

Raghuvanshi completed his impressive fifty in 64 balls with a single through on-side. The Indian batters were also aided by the fact that the Sri Lanka bowling attack was too wide or gave too much room to effortlessly play their shots. It was fitting that Raghuvanshi hit the winning runs, a late squeeze on a Matheesha Pathirana yorker through the third man to help India maintain a clean slate in the finals of the tournament.

Earlier, India’s bowling attack, with immaculate line and length and discipline, did exceedingly well to keep Sri Lanka to just 106/9. The fantastic show with the ball was started by pacers Rajvardhan Hangargekar, Ravi Kumar, and Raj Bawa. The trio pushed Sri Lanka on backfoot in the first ten overs, giving very little breathing space for the batters.

The toss went in Sri Lanka’s favour, but the innings didn’t go their way on a lush green pitch. Left-arm pacer Kumar provided the first breakthrough as Chamindu Wickramasinghe departed for three, giving a simple catch to Bawa at third man while going for a hoick over mid-wicket. Kumar could have got his second wicket if not for slip fielder dropping a tough chance apart from an early run-out chance missed.

Kumar and Bawa kept things tight as Sri Lanka crawled to 15/1, without scoring a boundary. Bawa got his first wicket as Shevon Daniel nicked behind to keeper Aaradhya Yadav for six. Sadisha Rajapaksa and Anjala Bandara struck a boundary each but off-spinner Tambe trapped the latter lbw.

Tambe returned to clean bowl Pawan Pathiraja for four. Rajapaksa, who had entered the double figures, holed out to Rasheed off left-arm spinner Ostwal. Ostwal returned in the 27th over to take out Dunith Wellalage (caught by Bawa at mid-wicket) and Ranuda Somarathne (trapped lbw). Sri Lanka laboured to reach 74/7 in 33 overs before rain halted play.

It took almost two and a half hours for the rain to relent before Sri Lanka could bat for five more overs to finish their innings. After the match re-started, a brilliant direct hit from Rasheed caught Raveen de Silva short of the crease. Rodrigo and Pathirana hit a couple of boundaries before the latter pulled straight to a diving Raghuvanshi at deep backward square leg to give Hangargekar a wicket on the last ball of the innings, ending Sri Lanka’s misery with the bat.