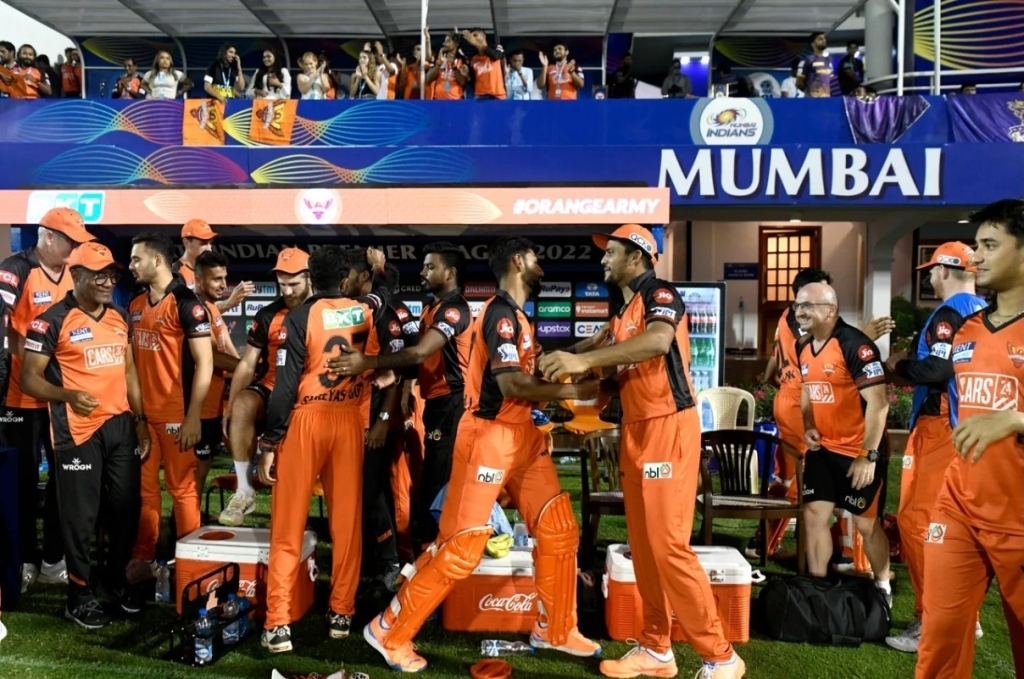 Mumbai : Superb half-centuries by Rahul Tripathi and Aiden Markram after a clinical performance by their bowlers helped Sunrisers Hyderabad overcome Kolkata Knight Riders by seven wickets in Match 25 of the IPL 2022 at the Brabourne Stadium here on Friday.

Tripathi and Markram got together after Sunrisers had lost their first two wickets for 39 runs. They raised 94 runs for the third wicket after their bowlers had done a good job to restrict Kolkata Knight Riders to 175/8 in their allotted 20 overs. Sunrisers eventually reached 176/3 in 17.5 overs to register a comfortable victory.

Tripathi topscored with 71 runs (37 balls, 4×4, 6×6) against his former team while Markram remained undefeated with 68 off 36 deliveries, hitting six boundaries and four sixes as SRH cruised to victory with 13 balls to spare.

They launched calculated attacks, hit big sixes and kept the Kolkata Knight Riders’ bowlers on the tenterhooks with their superb hitting. The dew of course did not help the Knight Riders but that was expected.

Tripathi, who had hammered spinner Varun Chakaravarthy to a four and two sixes — a well-timed loft over covers followed by am better shot on one knee in the same region — off consecutive deliveries in the 8th over to keep SRH well in control of the chase.

Markram, too struck Chakaravarthy for a four and six off successive deliveries, ended the match by hammering Pat Cummins to a four followed by two sixes — a heave over mid-wicket and a hook over deep square leg, to end the match on a rousing note.

This was the third win in a row for Sunrisers Hyderabad, who moved to six points from five matches. KKR slumped to their second consecutive defeat. They too have six points but have played a match extra.

Put in to bat first, the Knight Riders got off to a poor start as they lost three wickets with just 31 runs on the board.

Australian Opener Aaron Finch struck Bhuvneshwar Kumar for a six in the first over but was out in the next when he tried to give Marco Jansen the same treatment and ended up edging behind to Nicholas Pooran. Venkatesh Iyer scratched around for six off 13 deliveries before he was cleaned up by T Natarajan off his first delivery as the batter played all over the ball.

Sunil Narine seemed in some sort of hurry as he blasted the first delivery he faced for a six but was out off the next,trying to slice over point a low full toss angling into middle. It ended up straight into the hands of Shashank Singh.

Skipper Shreyas Iyer, who had started with a streaky boundary, and Nitish Rana took the score to 70 before the former got out, bowled by Umran Malik with an express delivery in the blackhole as he tried to make room to play a shot.

But Rana and Russell shouldered the responsibility of taking them to a respectable score. Rana played a well-controlled innings, hitting some well-timed boundaries and a couple of big sixes before he perished trying to bolster the scoring rate, given out by the video umpire for a faint edge behind as he tried to move away to smash Natarajan’s delivery on the on-side.

Russell gave the KKR innings the boost it needed, ending it with two sixes and a four of the final three deliveries bowled by spinner Suchith.

Natarajan was the best Sunrisers bowler on the field as he claimed 3/37 while Umran Malik ended with 2/27.

SRH skipper Kane Williamson used his resources well but taking off Natarajan soon after his first over, in which he claimed two wickets, looked a bit strange.

However, in the end it did not matter as Tripathi and Markram ensured they cruised to victory with a lot to spare.