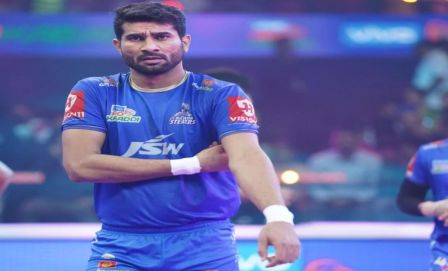 Hyderabad : With three wins in the last four games, Haryana Steelers have climbed up to the 8th position in the vivo Pro Kabaddi League Season 9 table with 51 points.

There are still two spots up for grabs for the playoffs, and the JSW Sports-owned franchise will have a solid chance to further climb up the ladder when they face off against the bottom-placed Telugu Titans in their next encounter on Thursday, at the Gachibowli Indoor Stadium here.

With Titans entering the contest after five straight defeats in a row, Manpreet Singh’s side feels confident that the momentum in the all-important encounter is currently in their favour. Raider Rakesh Narwal, who has been in fine form over the past few games, spoke on his team’s prospects against the home team.

“We feel confident about our chances in the next game against Titans. We have trained well, and we have strategized effectively on how to counter our opponents. We have been in good form and shape, while the Titans have not been able to pick up wins over the past few games. So, they might be feeling under pressure coming into the match, and we can make the most of that,” Rakesh said.

“Titans may have the home advantage, but we are confident that we will be able to focus on our own game and will not let the crowd distract us too much,” he added.
The veteran raider was instrumental in his team’s victory over Bengal Warriors last week, getting a late super raid in the final minute. He also performed well against Jaipur Pink Panthers in the Steelers’ previous match, earning 5 points.

“It helps the team when we have both right and left raiders. So, I am happy that I am able to make a contribution to the team. With Manjeet and Meetu already in good form, I can take my time and make a couple of quick raids to get crucial points for my team, and that is what I am working on,” Rakesh said.

He further went on to praise Jaideep and Mohit who have been in sensational form over the past few matches and explained how the duo is helping in relieving the pressure of the raiders.

“Both Jaideep and Mohit have been outstanding. They are the backbone of our team’s defence. They always know when they have to make the tackles and because they keep on getting points, it helps in taking the pressure off the raiders,” Rakesh said.

Entering the contest, Rakesh said that the atmosphere in the Steelers camp is quite good, and he expressed confidence his team will pick up the win against Telugu Titans.

“We have an electric atmosphere in our camp right now. Everyone is pumped up to give their best and contribute to the team. So, we are quite confident we will get the results we want against Titans,” he signed off.