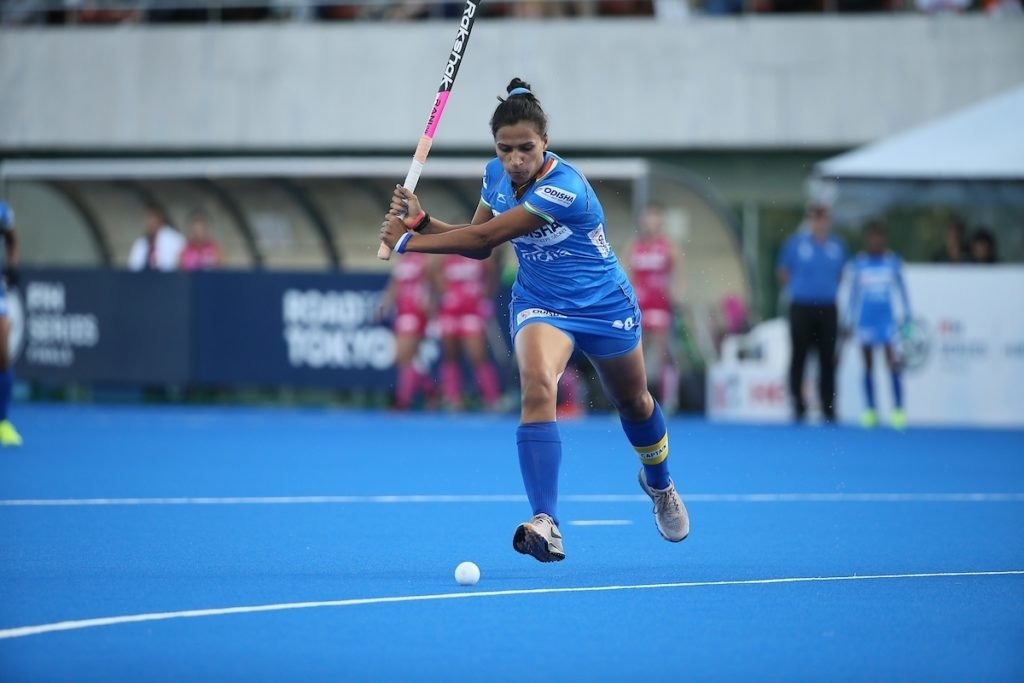 Tokyo: Forward Vandana Katariya scored a hat-trick as the Indian women’s hockey team struggled to put it across South Africa 4-3 in their final Group A match in the Tokyo Olympics women’s hockey competition, keeping alive their hopes of reaching the quarterfinals for the first time.

India will now hope that Ireland, also on three points from four matches, lose against the defending champions Great Britain in the last league match of the Pool. If Ireland lose or draw, India go through to the quarterfinals with six points. If the Irish win, they finish fourth and go through as they have a better goal difference.

Vandana scored in the 4th, 17th, and 49th minutes for her treble while Neha Goyal contributed one goal as India went ahead three times only to see the South Africans regroup and level score on all three occasions.

But the Indians could not be denied on Saturday as they scraped through by absorbing the pressure in the final quarter for their second successive win in the event. Vandana became the first Indian woman player to score three goals in a match in the Olympics.

The Indians could have easily made things more difficult for Ireland as a big win would have improved their goal difference which is -7, while Ireland are on -5. In the current scenario, Ireland have to win by just a one-goal difference to make it to the quarterfinals.

Things were not easy for India. The match could have easily gone out of their hands because of some sloppy defending as they allowed the South Africans to come back into the match every time the Indians scored a goal.

Vandana set the ball rolling in the 4th minute after India earned a penalty corner in the first minute itself. Though they missed the penalty corner, India maintained the pressure and Vandana capitalised on it as she put India ahead 1-0.

But the South Africans levelled the score with around 15 seconds remaining in the opening quarter as Tarryn Christie Glasby scored off a fine counter-attack.

India earned a penalty corner early in the second quarter and tried a variation and Vandana was there to deflect the ball home off a rebound to make it 2-1 for India.

India conceded a penalty in the last minute of the quarter and the South Africans capitalised on it again, scoring through Erin Hunter making it 2-2.

The script of the second quarter repeated in the third quarter as Neha put India ahead again, deflecting a hit by skipper Rani Rampal off a penalty corner. But the South Africans were on target again as they equalised within seven minutes, Marizen Marais pulling them level this time. The South Africans exerted a lot of pressure in the third quarter in search of their fourth goal but the Indians withstood the pressure.

South Africa maintained the pressure in the initial parts of the fourth quarter as they earned three penalty corners. But the Indian defence, with goalkeeper Savita standing strong, thwarted them.

India earned a penalty corner in the 49th minute but Gurjit’s shot hit a defender’s leg. Off the resulting penalty corner, Vandana scored, deflecting the ball home to make it 4-3.

India controlled the proceedings thereafter as they did not allow South Africa any chance in the last 10 minutes to seal the victory.

India held a slight edge in possession (51-49) but it was the attacking circle penetrations and shots at goal that would indicate the work put in by the players. India made 18 entries into the circle as against 11 by the South Africans; they had 14 shots at the goal as against just eight by their rivals.

The penalty corners remain an area of concern for coach Sjoerd Marijne as India earned 10 short corners but could score only off three. South Africa converted one of their four efforts.