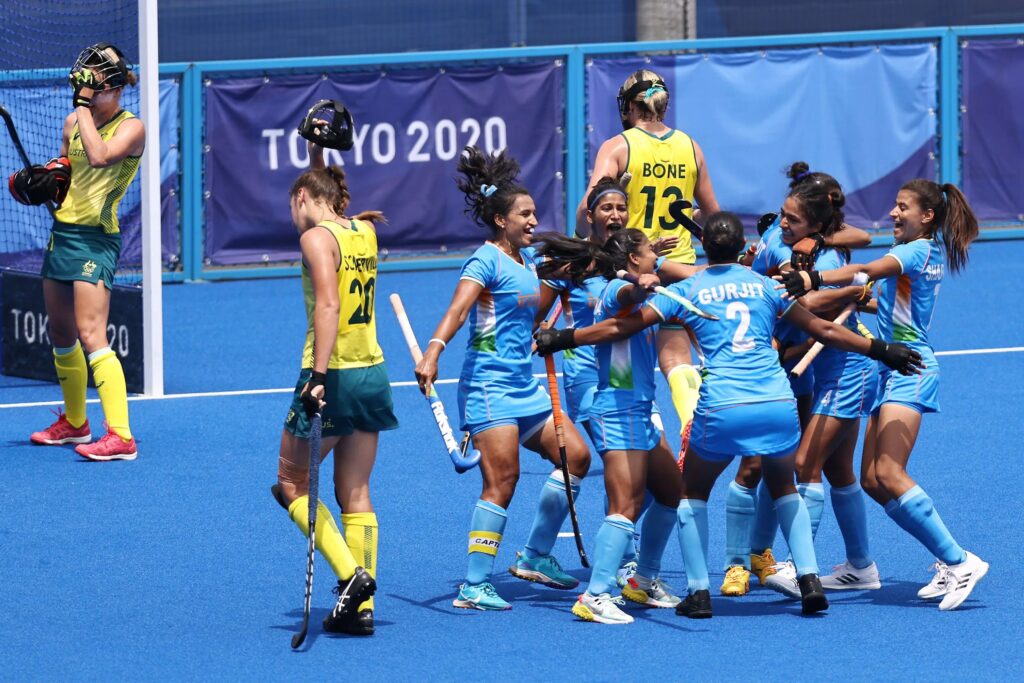 Tokyo: Taking inspiration from the men’s team that got into the medal rounds after a gap of four decades, Indian women’s hockey scripted a historic moment of their own by making their maiden entry into the semifinals at the Tokyo Olympic Games on Monday.

India defeated world No. 2 Australia 1-0 in the quarterfinals to storm into the last-four stage, marking their maiden entry into the medal round with a brilliant performance against a team that had dominated the tournament so far and was one of the favourites to win the gold medal.

Drag flicker Gurjit Kaur scored the all-important goal in the 22nd minute with a powerful flick that deflected off a defender’s stick into the goal.

The Indians then defended superbly and did not allow Australia, three-time gold medallists in the Olympics, to score in the entire second half with defenders Deep Grace Ekka, Udita and Gurjit Kaur and midfielder Monika, standing like a wall to guard the goal. And whenever the Aussies got past them, goalkeeper Savita was there to save India as she pulled off at least seven brilliant saves to thwart the Hockeyroos.

The Indians attacked aggressively, defended stoutly and controlled the midfield that allowed them to enjoy possession in the first half. Australia could not get into their rhythm early on and kept chasing the ball in the entire match.

India dominated the first half; they enjoyed more possession and also created better chances against an Australian team that had dominated Pool B with an all-win record in five matches.

They were not cowed down by the reputation of the world No. 2 team and stood toe-to-toe with the mighty Hockeyroos.

Australia earned the first chance when Ambrosia Malone struck the post off their first penalty corner.

The Indians too were unlucky not to take the lead in the first quarter as Sharmila’s shot at the far post came off the upright. Vandana Katariya made a superb run to the left backline and sent in a pullback to Lalremsiami who had positioned herself near the far post. However, her deflection came off the post as the two teams went into the first-quarter break goalless.

The Indians started aggressively and did not allow the Aussie forwards, who have been rampant in the group stage, many chances. They defended well and in numbers, especially Deep Grace Ekka and Monika were solid and brilliant as they cut down many Australian moves.

Goalkeeper Savita was rock solid and pulled off a number of good saves.

The second quarter changed the complexion of the match as the Indians went into the lead, leaving Australia frustrated.

India earned a penalty corner in the 21st minute of the match and went ahead, increasing the pressure on the Hockeyroos. Drag flicker Gurjit Kaur, who had failed to score a single direct goal despite a bag full of chances, struck for India, her drag-flick getting deflected from a defender’s stick and looping over goalkeeper Rachael Ann Lynch’s outstretched leg into the goal.

Australia attacked in numbers but found the Indian defence, especially goalkeeper Savita, impregnable. The Australians earned three penalty corners but could not capitalise on any. They had seven shots at the goal.