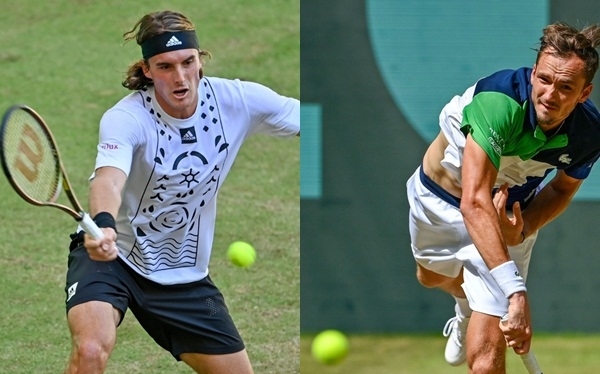 Mallorca (Spain) : Defending Champion Daniil Medvedev began his campaign at the Mallorca Championships with a 3-6, 6-4, 6-2 win over Aslan Karatsev, here on Wednesday.

Medvedev converted on the lone breakpoint of the second set for either man to move ahead late in the neck-and-neck set, then dominated the decider as Karatsev struggled with an apparent leg problem.

“It was tough to play in rhythm. It felt like many points were just whoever managed to put the ball in the court was going to win the point,” Medvedev said.

“It was not easy but I’m happy to win because that’s the most important thing,” he added.

After dropping serve midway through the opening set on the match’s first break point, Medvedev threatened an instant break back but could not convert on four opportunities. Instead, his comeback bid had to wait for set two.

Karatsev kept the pressure on by getting to 30/30 or deuce in three straight return games midway through the second, but Medvedev’s strong serving kept him in front until his crucial break in the eighth game.

Medvedev made just 48 per cent of his firsts serves in the opening set, but improved to 68 per cent and 69 per cent in the final two sets as he took control of the match.The 26-year-old dropped just one set in his 2021 Mallorca title run and could win his first title of the 2022 season with a successful repeat bid.

Medvedev will next face fifth seed Roberto Bautista Agut, who advanced when Nick Kyrgios withdrew due to injury. World No 1 earned his first victory against the Spaniard in their fourth ATP Head to Head meeting last week in Halle.

“He’s a great player… Really tough to beat him all the time. He’s a top player and hopefully we can have a good match,” Medvedev said about his clash with Agut.

Meanwhile, World No 6 Stefanos Tsitsipas defeated Ilya Ivashka 6-4, 6-4 to reach the quarter-finals. He did not face a breakpoint in his one-hour, 23-minute win.

Tsitsipas dominated behind his first serve, losing just five of his points behind his first delivery in the match (29/34). The 2019 ATP Finals champion also defended his second serve well, claiming 74 per cent of those points, largely due to his aggressive, first-strike tennis.

The Greek has now swept all three of his ATP Head to Head meetings against Ivashka this year, with those matches coming on hard, clay and grass courts, respectively.

“He has the game for grass courts, I’ve played him before.I’m hoping for a battle,” Tsitsipas said.