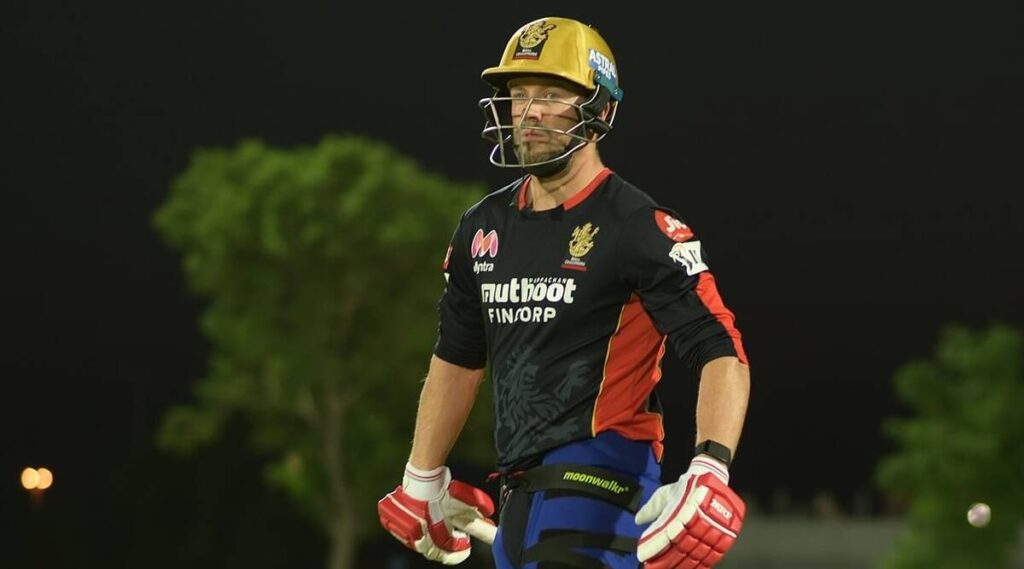 Dubai : Three-time IPL runners-up Royal Challengers Bangalore had their first practice match in The Sevens Stadium in Dubai to acclimatise to playing a full game in the hot and sultry conditions in UAE. The intra-squad practice match turned into an edge-of-the-seat thriller with fantastic performances from both teams, RCB-A and RCB-B, led by Harshal Patel and Devdutt Padikkal respectively.

RCB-A team won the toss and asked RCB-B to bowl first. The ‘A’ team put on a fantastic batting display and put up a total of 212 runs led by AB de Villiers, who continued with his belligerent form from the first half of the tournament. The 37-year-old de Villiers plundered 104 off 46 deliveries, laced with 7 boundaries and 10 sixes. The South Africa veteran was accompanied by Mohammed Azharudden, who smashed 66 off 43 balls, including 3 sixes and 4 boundaries, as RCB-A set a 213-run target.

“When we arrived and I got out off the bus, I thought it’s crazy that we’re trying to play a cricket game in the middle of the day. Luckily the breeze came up, I told my partner at the crease that it’s much better now and the pitch will get flatter. We had fun out there, I’m pleased with the runs on the board. It was very scratchy for the first 20 balls out there. I was very happy to get the runs. There’s nothing more valuable than just getting runs right in the middle,” said de Villiers about his knock on the latest episode of RCB ‘Bold Diaries’.

In reply, the RCB-B came out to chase a formidable total and performed exceptionally. KS Bharat led from the front and scored 95 runs to be the team’s leading scorer. Padikkal complemented him well with a 21-ball 36-run performance. The contest turned interesting towards the end as Padikkal’s team required three runs off the final two deliveries. However, they finished the chase with a boundary and won the match by 7 wickets.

“Very good game. Some good performances from a number of guys. Both top orders played really well. The fact we got to see them put under pressure at the end was exactly what I wanted to see,” said Mike Hesson, Coach and Director of Cricket Operations, RCB.

“We were hoping it will be a close game, but we saw the magic of AB in the first innings and Azhar batted really well. The second innings effort was better than the first innings. Chasing down a score of 212 and that partnership between KS and Dev where they put up 70 runs in 6 overs. What was pleasing to see was that all of them were well-timed cricket shots. They weren’t looking to muscle the ball… A lot of positives from this game and I am pretty sure this will build their confidence going into the tournament,” said batting consultant Sanjay Bangar.

Royal Challengers Bangalore will begin their second leg of the IPL 2021 against the Kolkata Knight Riders on September 20 in Abu Dhabi. They are ranked third in the points table with 10 points from seven matches.