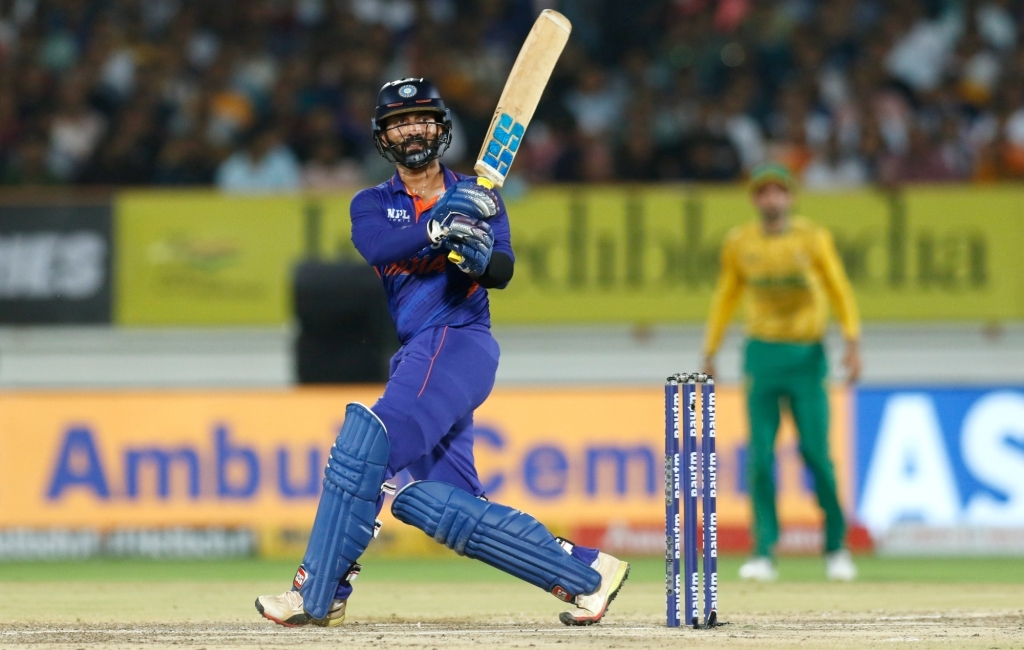 Rajkot : South Africa vice-captain Keshav Maharaj lavished praise on veteran India wicketkeeper-batter Dinesh Karthik for his blistering 27-ball 55 in the fourth T20I at Rajkot, adding that he is a difficult batter to bowl to as he looks for runs in unorthodox areas.

At 81/4 in 12.5 overs, Karthik bailed India out of trouble with a knock laced with nine fours and two sixes at a strike rate of 203.7. He was also involved in a crucial 65-run stand-off off 33 balls with Hardik Pandya to set up India’s 82-run thrashing of South Africa and take the series to a cracking finale at Bengaluru on Sunday.

“We saw why he was one of the leading performers in the IPL. He showed his class and played exceptionally well. He is difficult to bowl to. He (Karthik) has been in serious form in the role he is fulfilling. He is certainly one of the best finishers in the game. He scores in very unorthodox areas which makes him difficult to bowl to,” said Maharaj after the match.

After South Africa won the first two matches, India made a comeback in the five-match series by winning the next two matches to take the series in a decider to Bengaluru.

“We had a bit of momentum in the first two and India got the momentum in the next two. It makes that much more exciting to go to Bangalore, the crowds have been amazing so far, it will add to all the excitement.

“It is a good test for our cricket team to see how far we have come to play in events like these and try and clinch the series against a strong Indian outfit. Avesh Kahn adapted really well, utilised the conditions and kept it really simple and got the reward he deserved for consistent and controlled bowling,” stated Maharaj.

Karthik and Pandya’s onslaught meant South Africa lost their way in the back end of India’s innings, conceding a whopping 73 runs in the last five overs. “The way the wicket started off; it had a bit of variable bounce. Some of them took off very excessively and the odd one kept low. Obviously, in the last five overs, we gave away 70-odd runs and we need to come up with better plans and executions.

“Maybe we could have held our lines and lengths a little bit longer. We can always look at different aspects of the game where we can improve. But it’s back to the drawing board and we can come up with better tactics for the next game and try to combat the Indian lower order for that,” concluded Maharaj.