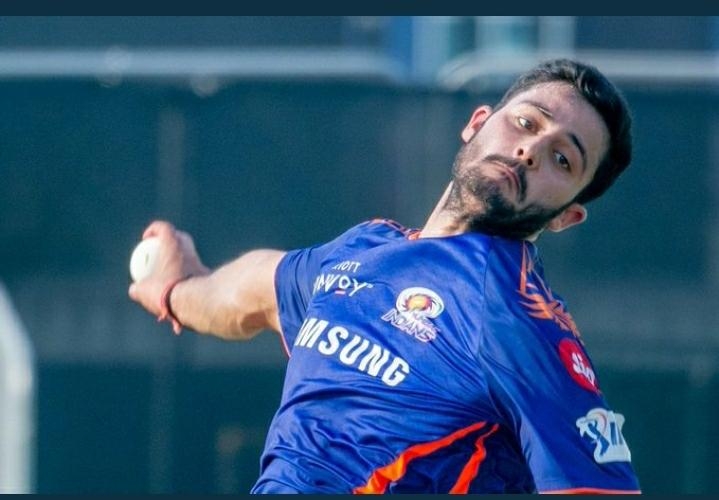 Mumbai, Mumbai Indians pace bowler Yudhvir Singh Charak says he had tears flowing down his cheeks the moment bowling head coach Zaheer Khan “raised the paddle” after his name was called during the Indian Premier League (IPL) auction on February 18 this year.

“I knew that if my name came up, it would be among the last names. If not, I was okay with it. We all were sitting; me, my family, our eyes fixed on the television. Then, when my name came up and when Zak sir (Zaheer Khan) raised the paddle, tears started flowing down my cheeks,” recalled Charak in a video posted by Mumbai Indians on Twitter.

“I can’t express how unbelievable that feeling was. It (MI selection) was a really big deal for me and for my state (Jammu and Kashmir). They (J&K team-mates) had very high hopes that I will play a match and do well take our state to new heights,” said the right-arm bowler, who was with the team as a support bowler in UAE.

Charak, who has represented Hyderabad in the Syed Mushtaq Ali Trophy and competed in several age-group tournaments, was picked at a base price of Rs 20 lakh.

MI team manager Rahul Sanghvi said that, “We are always good at picking uncapped players with talent, which we have done this year as well by choosing Yudhvir and Arjun (Tendulkar). Both were part of our support players group in the IPL in UAE. The coaches were satisfied that these guys will fulfil the role we were looking at and we picked them.”

Zaheer said, “So, we have Yudhvir, who we are looking forward to. This environment has been benefiting everyone who has been part of it. We encourage them to enjoy the atmosphere, enjoy the moment and learn as they go along.”

For Charak, it is more about learning from a team that has won five IPL titles than anything else. “This is the start of my careerat a high level. I’ll get to learn a lot from the senior players. They would have selected me with some role in mind. So, I want to do the best for my team. And learn as best as I can. They are the five-time IPL champions.”