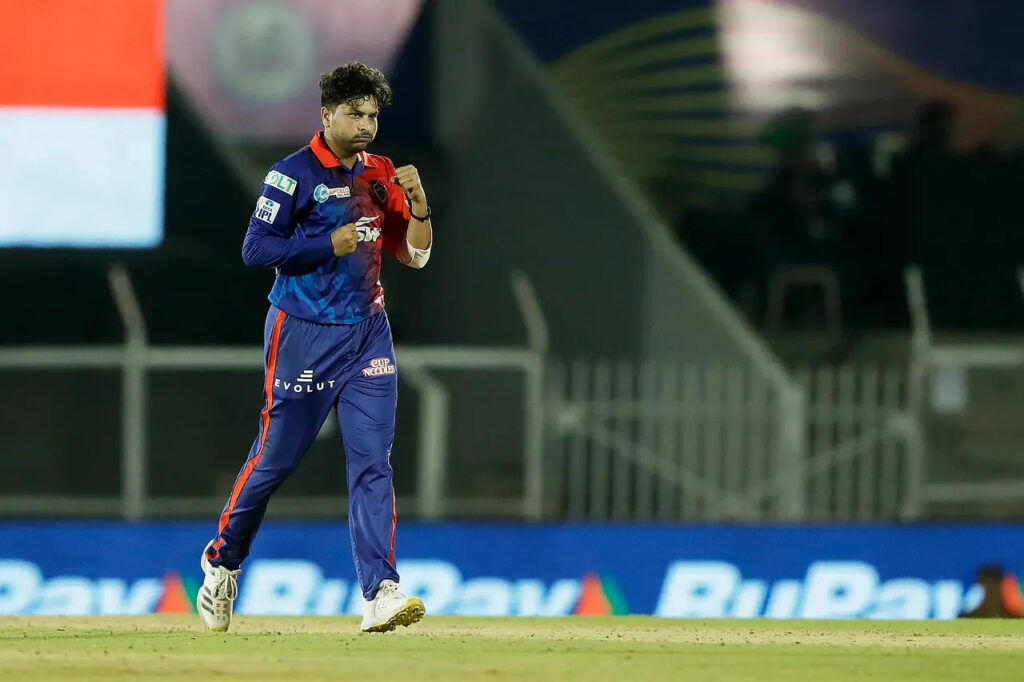 Mumbai : In this edition of IPL 2022, the resurgence of Kuldeep Yadav has been a heart-warming story. After taking just five wickets between IPL seasons of 2019 and 2021 with Kolkata Knight Riders, Kuldeep has picked 13 wickets in six matches of IPL 2022 with Delhi Capitals at an average of 14.30 and economy rate of 7.85.

A change in franchises in the IPL has led to Kuldeep rediscovering his old touch and the abilities which make him a fierce threat. After picking his third straight player of the match award for figures of 2/24 against Punjab Kings, Kuldeep was modest and displayed sportsmanship spirit in accepting the honour, saying that he wants to share the award with Axar Patel, who took important scalps of Liam Livingstone and Jitesh Sharma compared to him castling Kagiso Rabada and Nathan Ellis in successive deliveries.

“But I think I would like to share this award with Axar (Patel). He bowled well and took important wickets in the middle. I have played a lot against KG (Rabada) and I know he does not move his feet much, my plan was to bowl one chinaman and then the googly. The second wicket (Ellis) was due to Rishabh (Pant) telling to bowl from round the wicket. I just decided to keep the pitch full and that’s how that wicket fell,” said Kuldeep after the match.

The confidence and clarity apart from not being disturbed by going for runs in Kuldeep’s role at Delhi is working wonders for the left-arm wrist spinner. “To be very honest, through this IPL, I have got plenty of confidence this season and I am also mentally clear with my role. I just focus on my line and length and not on what the batter is going to do. When I err in length, I am not perturbed by it. If my length is good, then I can slip in the wrong ‘un and the flipper.”

So high is the confidence right now that Kuldeep listens more to his gut feel rather than seeing videos of batters as match preparation. “I don’t watch videos now a this point of time because I have played against all of these batters. When you are very confused you watch videos to see what a batter might do. I am just focusing on how I feel.”

The change in set-up means a change in skipper and Kuldeep is certainly enjoying the support coming from a young captain in Pant. “I am enjoying my bowling after a long time and the lot of credit goes to Rishabh for backing me. That gives a lot of confidence for a bowler. The way that he backs us bowlers, even when we go for runs. That’s a huge positive for us bowlers.