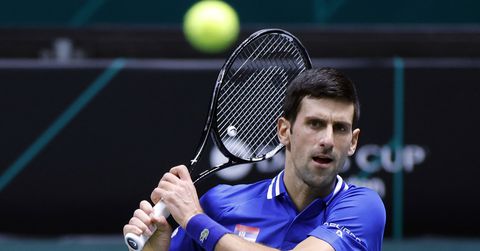 Melbourne : World No one tennis player Novak Djokovic will not be immediately deported from Australia, a government lawyer told a court hearing on Thursday as the tennis star remained in hotel quarantine.

Facing a legal challenge from the Serbian, state lawyer Christopher Tran on Thursday said Australia did not plan to deport him before Monday’s hearing in a Federal court.

Earlier in the day, the 20-time grand slam winner Djokovic was denied entry into Australia after his visa was cancelled by border force officials at Melbourne airport amid a storm of protest about a decision to grant him a medical exemption from Covid-19 vaccination requirements to play in the Australian Open.

The tennis star was holed up in a quarantined hotel in Melbourne as his lawyers sought an urgent injunction to allow him to stay in the country after he was detained by officials at the border. Djokovic’s legal team also managed to secure an interim injunction preventing authorities from deporting the tennis star until at least Monday.

On Tuesday, the world No 1 announced he was travelling to Australia on an “exemption permission”, but after landing in Melbourne on Wednesday evening he was held in isolation after reportedly attempting to enter the country on a visa that does not permit medical exemptions for being unvaccinated against Covid-19.

After being held for several hours in the airport, during which he was placed in isolation in a police-guarded room, the Serb’s visa was cancelled in Australia.

The border officials said the 34-year-old had “failed to provide appropriate evidence” for entry after arriving from Dubai.

“The ABF can confirm that Mr Djokovic failed to provide appropriate evidence to meet the entry requirements to Australia, and his visa has been subsequently cancelled,” the Australian Border Force (ABF) said in a statement.

“Non-citizens who do not hold a valid visa on entry or who have had their visa cancelled will be detained and removed from Australia. The ABF can confirm Mr Djokovic had access to his phone,” it added.

Shortly after the announcement, Australian PM Scott Morrison re-iterated that nobody was above the country’s border rules.

“Mr Djokovic’s visa has been cancelled. Rules are rules, especially when it comes to borders. No one is above these rules,” Morrison said in a tweet.

“Our strong border policies have been critical to Australia having one of the lowest death rates in the world from COVID, we are continuing to be vigilant,” he added.

The Serbian, who has never spoken publicly about his vaccination status, had previously said that he was unsure whether he would compete at the January 17-30 tournament in Melbourne due to concerns over Australia’s quarantine rules.

With his record nine titles, Djokovic is the most successful player in the history of the Australian Open. He is also in a three-way tie on 20 career Grand Slams titles with Roger Federer and Rafa Nadal in the all-time list.