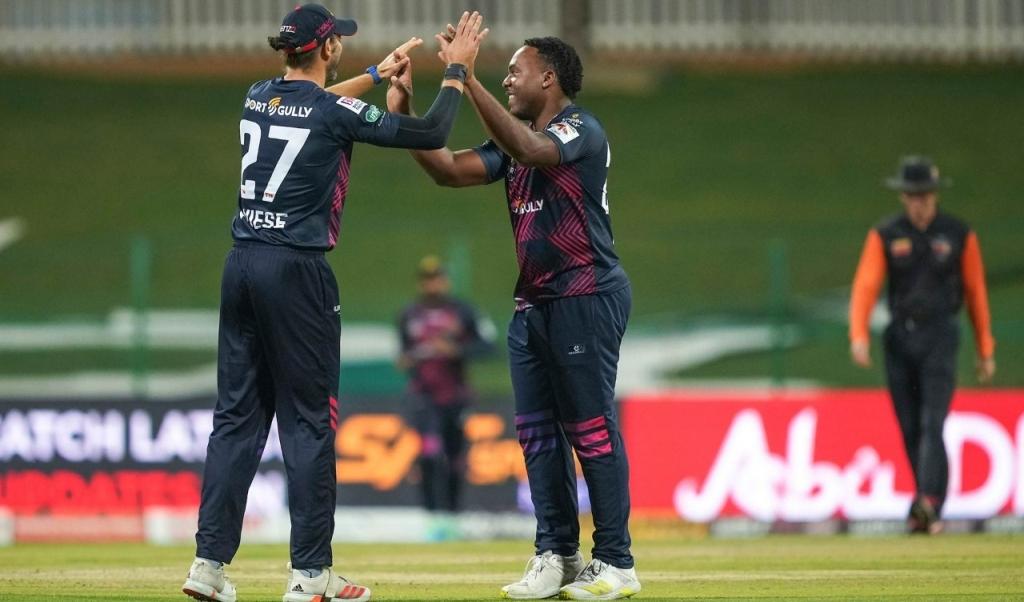 Abu Dhabi : Deccan Gladiators’ fast bowler Odean Smith on Tuesday said that his stint in Abu Dhabi T10 has prepared him for the upcoming limited-overs series against Pakistan.

“We will be playing ODIs and T20Is in Pakistan. The T10 is a bit shorter. Pakistan are a very good team. They have some of the best batsmen in the world right now. Dealing with the pressure of a T10 format will really help me when I go down there bowling against those guys,” the West Indian cricketer said.

He further said players with all-round abilities have a better chance of selection in a T10 format, and hence he is also working on his batting abilities.

Gladiators have won six out of eight games so far in Season 5 of Abu Dhabi T10 and Smith’s batting prowess late down the order has helped his side take the top spot in the points table.

“In the modern game, all bowlers are required to come lower down the order and score quick runs,” Smith said during a virtual media interaction.

“T20 is in demand for allrounders. I have been working on my all-round game. If I get a chance to bat, my job is to hit balls for boundaries. It is very good for bowlers to do some work on their batting so they can go on out there and hit a few,” he said.

Recalling his sensational six against the Bangla Tigers last week that went viral on social media, Smith said that he knew what left-arm pacer James Faulkner was going to bowl and he was ready to go for the big hit.

“I actually knew what he was going to bowl. I was just trying to keep up my shape and keep my eye on the ball. I just hit it as hard as I could. You are more likely to play in this format and be an asset when you can do both – bowl and hit a few shots lower down the order,” he said.

Speaking on the challenges he faces in the T10 format, Smith said that a bowler has to attempt to execute perfect yorkers. He also added that playing in this format can give a lot of self-confidence to bowlers.

“It’s quite difficult to come up with strategies. You have to assess the conditions quickly. Most bowlers try to execute at least 8 yorkers in their spell. It is a good strategy. But you have to nail those yorkers. It is a batsman’s game. Batsmen are not going to block a few balls. They are going to start hitting from the first ball,” he said.

“The T10 is a good format for players like me who can come and challenge themselves against world-class batsmen. You only have 12 balls and the execution has to be perfect. You bowl 12 good bowls here, then you go to the T20 stage and you realise you don’t have to think too much about two overs. Your confidence level goes up,” Smith added.