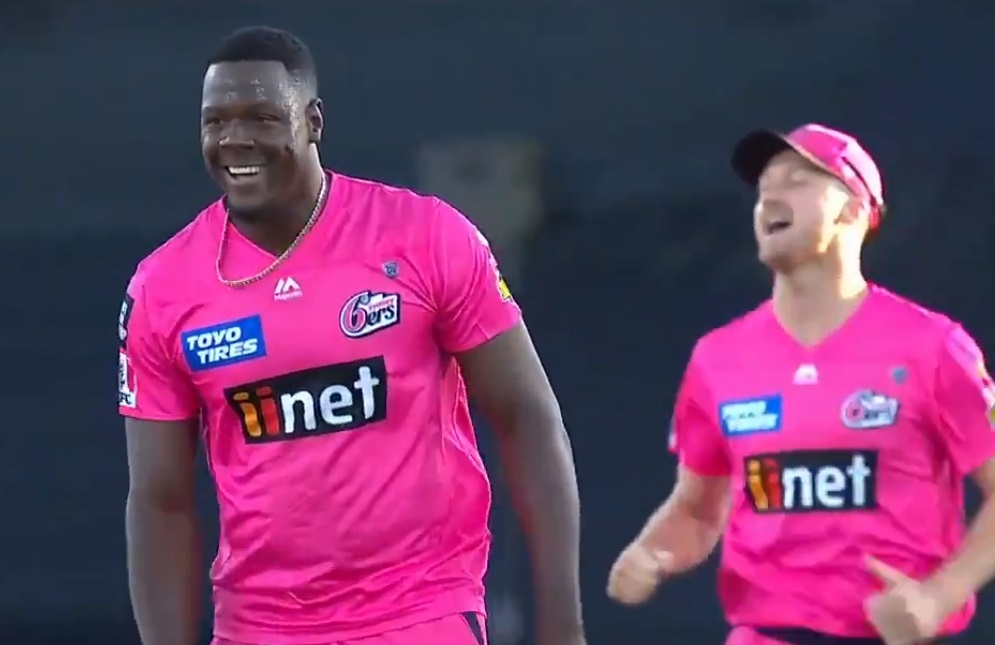 Sydney : Former West Indies T20I skipper Carlos Brathwaite will be looking forward to another fruitful Big Bash League (BBL) season when he turns out in Sydney Sixers’ colours again, and would be aiming to help the side win a hat-trick of titles.

The Barbados-born West Indies all-rounder played a key role in the Sixers’ title win in the previous edition, taking 16 wickets for the season.

Brathwaite is best known for his match-winning four consecutive sixes off England’s Ben Stokes in the 2016 ICC World Twenty 20 Cup final’s last over that propelled West Indies to the title.

The feat prompted commentator Ian Bishop to demand viewers watching coverage around the world get to know Brathwaite with the line “Carlos Brathwaite, Carlossss Brathwaite…. Remember the name.”

The 33-year-old all-rounder had played a four-game cameo at the club in BBL7 before returning to help the team claim a second straight title last season in BBL10.

Having finished a busy UK summer playing for the Birmingham Bears in the T20 Blast and captaining the Manchester Originals in The Hundred, Brathwaite is currently preparing to play for the Jamaica Tallawahs in the Caribbean Premier League.

Brathwaite said returning to one of his favourite cities (Sydney), with “a great teammates and wonderful fans was all too appealing an opportunity to pass up”.

“Obviously winning (BBL10) and the team’s success last year made it attractive to want to come back,” Brathwaite said.

“As you get older you definitely want to be somewhere you can hopefully be challenging for trophies but at the Sixers there is a deeper camaraderie and sense of family atmosphere.

“As a team we went through a tumultuous season last year on the road without getting back to Sydney until the final and we built a very strong bond. The BBL is one of the biggest T20 tournaments in the world and hopefully that bond can help us to success again, this time in front of our fans at the SCG all season.”

And it is that ‘Magenta Movement’ — the members and fans of the Sixers — that Brathwaite believes played such a crucial role in the title-winning performance last summer.

“That BBL final at the SCG last season was so special,” he remembered.

“We played away from home all year and performed well enough to earn a home final. It was the only game all year with our own fans, played at our home, not someone else’s home ground or a neutral venue.

“There was an amazing build-up to the game but even more amazing was our execution and the execution of the fans being our 12th man and cheering us all the way. It made it even more special and exceeded expectations really of what it could be like.”

Brathwaite joins fellow international Tom Curran with only two players yet to be confirmed for a BBL11 campaign set to get underway against the Melbourne Stars on December 5.