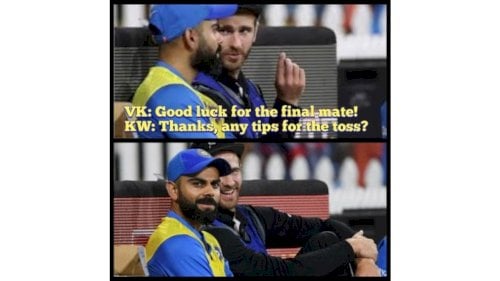 The meme shows Williamson in discussion with Kohli, with the former India T20 skipper wishing the New Zealand captain “Good luck for the final.”

Williamson then ‘asks’ Kohli for tips to call right. “Thanks, any tips for the toss?” Jaffer captioned the meme.

The next image shows the two skippers having a hearty laugh.

Kohli’s poor luck with the coin is being attributed to India’s dismal showing at the World Cup in the UAE, with the former India skipper losing the toss against Pakistan as well as New Zealand, the two big-ticket games which decided the 2007 T20 World champions’ fate.

Almost every team that has won the toss during the T20 World Cup here so far has opted to bowl first due to the dew factor that comes into play in late-evening matches, making gripping the ball difficult and batting easy in the second innings.

Kohli again lost the toss against Afghanistan but this time the team won by 66 runs, largely due to the inexperience of the opponents. In the last two ‘Super 12’ games, India won the toss against Scotland and Namibia, winning by eight and nine wickets respectively, but by then their fate in the tournament had been decided.