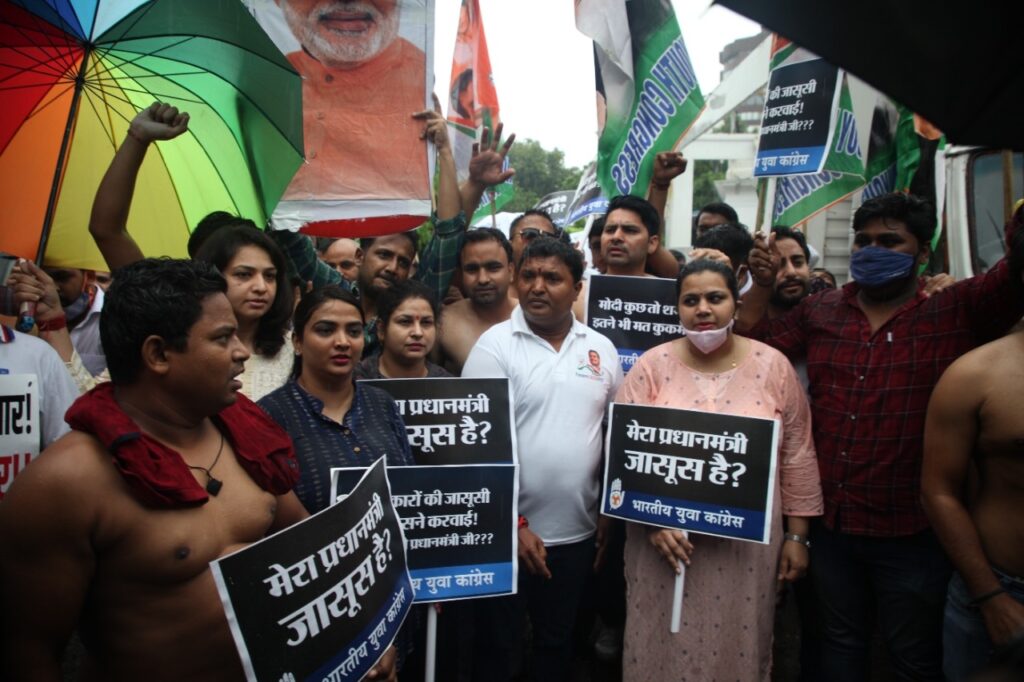 New Delhi, Hundreds of Indian Youth Congress (IYC) activists on Tuesday again staged a protest in the national capital over the alleged phone tapping through Israeli software Pegasus. They reiterated their demand for a Joint Parliamentary Committee (JPC) probe under the supervision of the Supreme Court.

However, as they moved towards Parliament House they were detained by Delhi police and taken to Mandir Marg police station in central Delhi.

Slamming the Union government, Srinivas said today both the Constitution and the law are being throttled by the Narendra Modi government.

“Democracy is being trampled under its feet. The fundamental rights of the citizens of the country are being suppressed,” he added.

He accused the BJP-led Central government of committing treason and playing with national security.

He said, “The opposition leaders of the country, including Congress leader Rahul Gandhi, journalists of different media organisations and people holding constitutional posts, have been spied on.”

Taking a jibe at the Bharatiya Janata Party (BJP), Srinivas said the name of the ruling party should be changed to ‘Bharatiya Jasoos Party’.

The NSO group is saying that Pegasus is used by governments to fight terrorism.

Srinivas while seeking an answer from Prime Minister Narendra Modi, asked what crime and terror was he fighting by spying on Rahul Gandhi’s phone?

He pointed out that news reports are claiming that not only journalists, leaders of opposition and even their own ministers were snooped upon.

“By such an act, the cowardly Modi government has hurt the image of the country at the international level. And we demand that this spying case should be investigated at the earliest by the JPC and under the supervision of the Supreme Court,” Srinivas BV said.

IYC National Media in-charge Rahul Rao said they will not stop until the people involved in the spying were punished.

The issue led to a stormy start of the Monsoon Session of Parliament after a global collaborative investigative project revealed that Israeli company NSO Group’s Pegasus spyware has targeted over 300 mobile phone numbers in India, including that of two ministers in the Narendra Modi government, three Opposition leaders, constitutional authority, several journalists and businessmen.

The Congress on Monday accused the Central government of “treason” and held Union Home Minister Amit Shah responsible for the snooping and hacking of phones of journalists, judges and politicians, and demanded a probe.