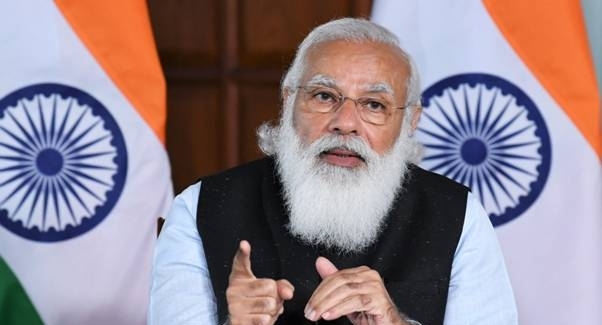 Wishing Modi, President Kovind tweeted, “Happy birthday and best wishes to Prime Minister of India Narendra Modi. I wish you good health and long life and continue to serve the nation with your well-known spirit of ‘Aharnisham Sevamahe’.”

Vice President Naidu said, “My best wishes to Prime Minister, Narendra Bhai Modi ji on his birthday today. His exceptional vision, exemplary leadership and dedicated service have led to all-round growth of the nation. May he be blessed with a long, healthy and happy life ahead.”

“Modi ji not only gave the country the thought of thinking ahead of time and proving its resolve with the culmination of hard work, but also showed it by making it a reality.”

Wishing the Prime minister, Defence Minister Rajnath Singh said, “Happy birthday to Prime Minister of India Narendra Modi. Known for his decision-making ability, imagination and vision, Modiji’s resolve to make India a self-reliant India is a symbol of his vision and strong will.”

Greeting Prime Minister, BJP Chief J.P. Nadda said, “Happy birthday to world’s most popular leader Prime Minister Narendra Modi dedicated to the empowerment of the last man in the society, visionary, decisive leadership and a symbol of tireless work. I pray for your long and healthy life.”

The Shiv Sena-led Maha Vikas Aghadi government leaders on Friday warmly greeted Prime Minister Narendra Modi on his 71st birthday, wishing him the best of health and a long life.

Chief Minister Uddhav Thackeray said: “We wish him a long and healthy life on his birthday.”

Deputy Chief Minister Ajit Pawar in his birthday greetings added: “We expect the PM to ensure equal justice and development opportunities to Maharashtra and other countrymen.”

“We may have our political differences but today he is the tallest leader, with nobody who can challenge him, and heading a party with full majority in parliament,” Raut said.

Leaders from various political parties, celebs, glamour personalities and commoners have expressed their wishes and prayers for Modi.

“On behalf of the Government and people of Telangana, I wish you a very happy birthday. May God bless you with good health and long life for serving the nation for many more years,” read the letter.

Andhra Pradesh Governor Biswa Bhusan Harichandan also greeted Modi on birthday. “I along with the people of Andhra Pradesh, with pleasure and privilege convey our heartiest felicitations and warm greetings to you on your Birthday,” tweeted the governor.

Eminent personalities from the Bollywood and music world like Lata Mangeshkar, Asha Bhosle, Anup Jalota and many others recounted their experiences with Prime Minister Narendra Modi on a social media platform.

Actor-politician Pawan Kalyan also greeted Prime Minister Modi and termed him as a ‘great visionary’.
The Jana Sena president said, “I had a great desire that the nation needs a strong leader. I used to wish that he shall be a statesman who must have broad knowledge about Indian culture and traditions. It is a big task to hold the highest position for any person of any stature. If find Sri Narendra Modi, who is in the highest position, as a great visionary.”
The actor recalled that he had opportunity to participate in the campaign alongside Modi during the 2014 general elections. “The journey helped me observe his force of attraction closely. Even his political betenoires are unable to restrain themselves without appreciating his commitment.”
To mark Prime Minister Narendra Modi’s birthday and his decades in public service , the BJP youth wing, Bharatiya Janata Yuva Morcha (BJYM) will be undertaking various welfare and awareness programmes and host ‘Nava Bharat Mela’ from September 17 to October 7 across the country.