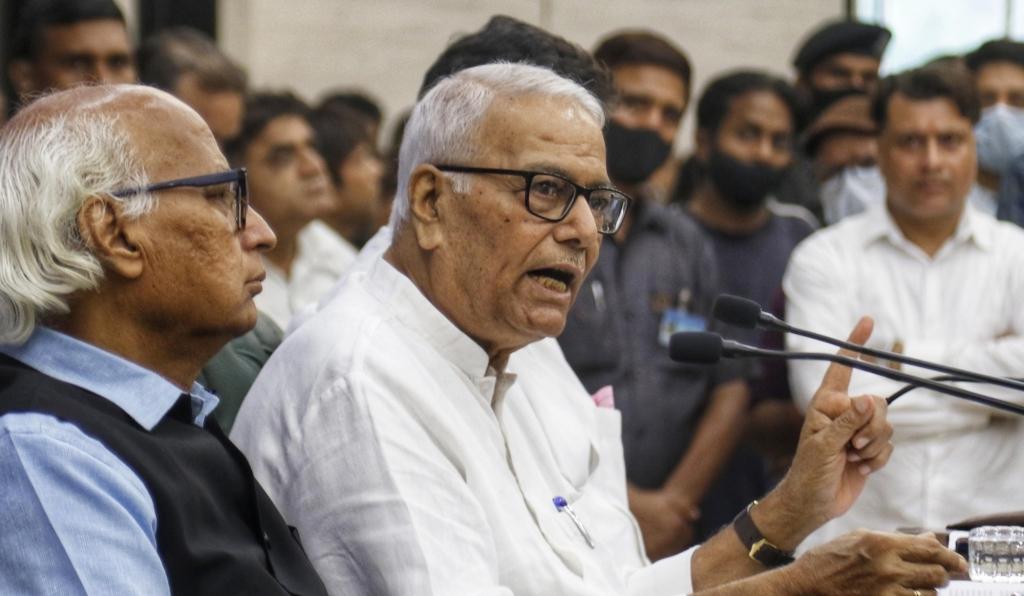 New Delhi : Joint opposition candidate for Presidential poll Yashwant Sinha on Monday said he would reach out to his former colleagues in the Bharatiya Janata Party (BJP) seeking their support.

As the number is against Sinha in the Electoral College for the Presidential poll, the joint opposition parties’ candidate said he will write to all the MLAs and MPs to seek their support in the election.

“I would reach out to all my old friends and former colleagues in the BJP seeking their support in the election,” he said.

Addressing a press conference after filing the nomination for the Presidential poll here, Sinha claimed that the BJP he was part of had internal democracy, and the current one is lacking it.

Sinha termed his rival NDA candidate Draupadi Murmu, a tribal, as part of politics of symbolism by the ruling alliance.

“It is not a contest of identities but it is a contest of ideology. This government only believed in symbolism and did nothing for upliftment of the community in the last eight years. I contest the poll on the track record of the government for the backward communities,” he said.

He blamed the government for not trying to bring a consensus for the Presidential candidate.

“It would be better if there is a consensus candidate for the post. The government did not make any attempt to forge consensus,” he said.

Sinha noted that he is fighting this election to save India and India’s Constitution.

“This election is not about two people. I have great personal regard for Draupadi Murmu. It is not about where we come from or the people that we represent. This is an election between two ideologies. I have witnessed Indian democracy being born, and now dying. My generation built up this democracy and gave it life. Now as my generation is departing, we are seeing the death of Indian democracy. We will not let this happen,” he said.

He alleged that the ruling party is contemptuous of the Constitution which limits executive power to its proper place and their goal is to exercise absolute, unchecked power.

“They do not believe in democracy and it shows. All power is centralised with the Prime Minister. Every single institution in this country is being corrupted and weakened to maintain his hold over the system. As citizens, we must ask why? Why are they destroying Indian democracy? What are their goals? Do they want to establish a dictatorship of the few,” he said.

He further noted that Parliament has been made a rubber stamp and laws are rushed through the system without any scrutiny or debate.

He further alleged that the Centre has launched multiple attacks on the federal structure of the Constitution, robbing states of their legitimate power.

“I was the Finance Minister in Atalji’s government which lost a no-confidence motion in 1999 because of one vote. On the other hand, this government has made it a habit to break duly elected governments to capture power at all costs. The latest conspiracy to topple the Shiv Sena, NCP and Congress government represents political immorality at its worst,” Sinha said.

“This Presidential election is not about two candidates. It is about a battle between two ideologies. Their ideology is absolute power with destruction of democracy, our ideology is freedom for every Indian citizen.

“We want to strengthen the democracy that our Founders laid out in the Constitution. I appeal to all MPs and MLAs to vote for me regardless of their party affiliation,” he said.

When asked about his son and BJP MP Jayant Sinha supporting the NDA candidate, the opposition presidential candidate said: “He is following his ‘Raj Dharma’. I am following my ‘Rashtra Dharma’.