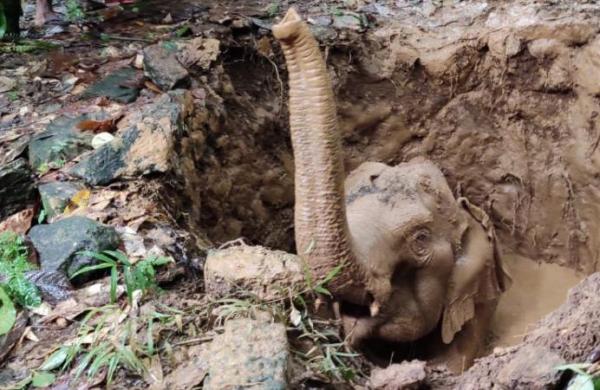 Kochi,  After several hours of hard work by a rescue team of forest and police officials a wild elephant which had fallen into a well in a private property near Kothamangalam, about 70 kms from here, was taken out and allowed to walk into the forest.

But the rescue operation was halted for a while when the locals created a furore stating that they need to be assured that the frequent damage caused by herds of wild elephants to their crops will be compensated.

“This has become a regular feature and this time we have been assured that due compensation will be given,” said a local resident who said they are under pressure by the damage caused by the wild elephants.

It was after top forest officials assured them, that the locals agreed and the rescue operation resumed and soon the elephant walked to freedom.

The accident was first noticed on Wednesday morning when locals heard the cries of an elephant and found it stuck in the well. They immediately informed the authorities who swung into action.

The rescue team was also helped by a large number of local people.

According to them, this happened at a place called Pinavoorkudy.

The locals said that on Tuesday night a herd of wild elephants had come into the area and this incident might have occurred when they were returning to the forest.

The officials involved in the rescue efforts earlier said they were confident that they would be able to take out the jumbo.