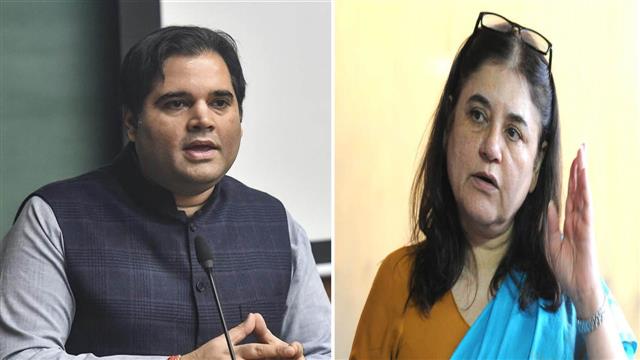 New Delhi : Bharatiya Janata Party leader Varun Gandhi and his mother Maneka have been dropped from the saffron party’s national executive whose team was reconstituted on Thursday by party president JP Nadda. Union Minister Smriti Irani, however, has made a comeback to the executive team.

Maneka Gandhi had been a Union minister in the first tenure (2014-19) of the Narendra Modi-led government and she is currently a Lok Sabha MP from Sultanpur in Uttar Pradesh.

Her son Varun Gandhi is Lok Sabha MP from Pilibhit in Uttar Pradesh.

Varun Gandhi has been quite vocal through his tweets on the October 3 Lakhimpur Kheri violence, demanding action.

In a letter written to Uttar Pradesh Chief Minister Yogi Adityanath, Varun Gandhi alleged that the farmers were killed, and sought action on the issue.

Sharing a video on Twitter, he wrote that the protesters cannot be silenced through murder and accountability should be fixed.

His stance on the Lakhimpur Kheri issue is being seen as a reason behind his removal from the BJP’s executive committee.

Nadda’s new team sees the return of Union Women and Child Development Minister Smriti Irani, who defeated former Congress president Rahul Gandhi in the Lok Sabha elections from Amethi. Irani has been given a place in the National Executive as a member.

Apart from film actor Mithun Chakraborty, Union Minister Jyotiraditya Scindia, Shubhendu Adhikari, and many leaders from other parties (who switched over to BJP) have also been included.

A BJP leader said this time around 30 per cent new leaders have been included in the executive team.

The meeting of this newly formed team will be held in the national capital on November 7.