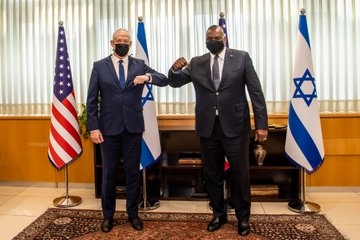 Tel Aviv,  During a meeting with Israeli Defence Minister Benny Gantz, visiting US Defence Secretary Lloyd Austin said he was committed to boosting the Jewish state’s security and “continuing our close consultations on threats posed by Iran”.

Austin’s two-day visit marks the first by a US official since President Joe Biden’s inauguration in January.

Following a meeting between the two diplomats on Sunday, Austin thanked Gantz for the “important discussions on the regional threat environment and ways to deepen US-Israel defenxe cooperation”.

“I’m committed to continuing our close consultations on threats posed by Iran and to strengthening Israel’s security,” he added.

In response, Gantz said: “We will continue to work with the US to ensure that any agreement with Iran safeguards the vital interests of the international community and protects Israel.

“Secretary Austin and I agreed to continue a close dialogue on the urgent security challenges in the region.

“Grateful to share vision and goals with our strategic partner and friend and know that we will work together to make sure that any Iranian nuclear agreement protects the vital security interests of the international community and of Israel.”

The Defence Secretary is not expected to visit the Palestinian Territories, although Biden has signalled that he wants to rebuild ties with the Palestinians.

The previous administration of Donald Trump made several major diplomatic moves which were welcomed by Israel but denigrated by the Palestinians, including moving the US embassy to Jerusalem, and weakening support for a two-state solution.

Austin is expected in Germany on Tuesday, and in Brussels after that.