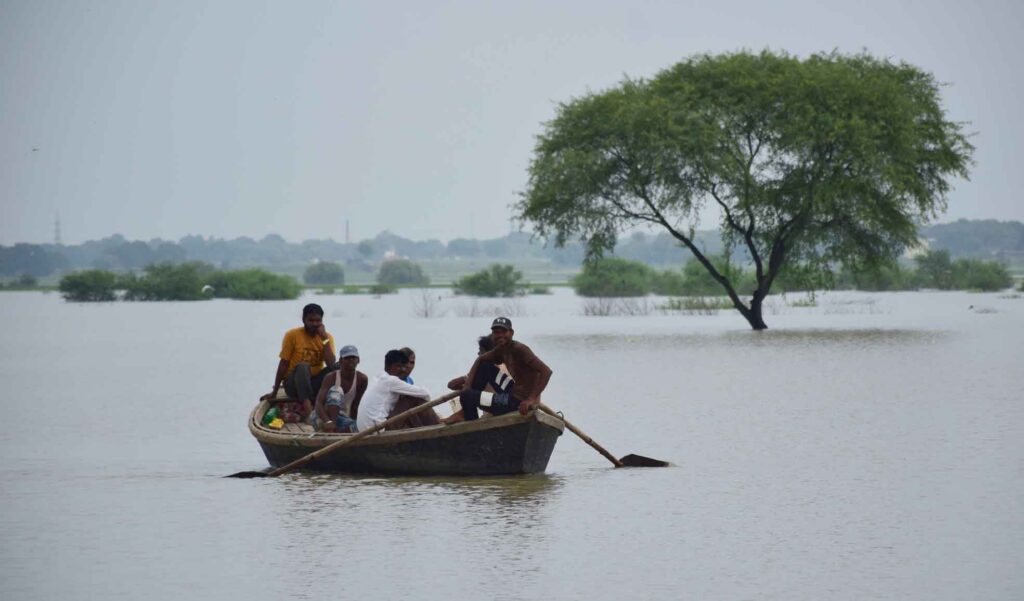 Lucknow: Due to the increase in the water levels of rivers in Uttar Pradesh, the Yogi Adityanath government sounded an alert and asked all concerned officials to maintain a close vigil on the situation.

In Prayagraj, the water levels of the Ganga and Yamuna, is fast approaching the danger mark (84.73 metres) and the flood situation is getting grim in the low-lying rural areas.

People are moving away to safer places as the water has flooded several localities.

The water level of Ganga, as recorded on Saturday evening, in Phaphamau was 84.03 metres, and in Chhatnag it was 83.30 metres.

Likewise, the water level of Yamuna, as recorded at the same time, in Naini was 83.88 metres.

The two rivers have continued to increase at all three points at a pace of around 10-11 cm (since the last four hours).

As per the irrigation department, it may touch the danger mark by Sunday evening.

With the continuous rise in level of Yamuna, flood water has reached Baradari along the banks of the river at Baluaghat.

Similarly in Varanasi, the water level of Ganga has also risen sharply and thus approaching towards the danger mark after crossing the warning level.

A more alarming situation was on the banks of its tributary river Varuna as swollen Ganga flooded it and people dwelling in dozens of localities of Varuna banks were forced to shift to safer places.

According to the flood bulletin of Central Water Commission’s Middle Ganga Division office, the water level of Ganga had already crossed the warning level of 70.26 metres in Varanasi on Saturday.

Threat of further rise in water level and crossing the danger mark continued as the river has been maintaining the rising trend in upstream from Phaphamau, Prayagraj and Mirzapur, where it was flowing near warning level of 76.72 metres.

At the Ganga upstream in Varanasi, the increasing water level has started causing panic among the people living in low lying areas.

As several localities are flooded, flood relief camps are being set up by the administration to provide adequate facilities to the affected people.

Meanwhile, the administration and NDRF are helping locals as well as keeping a strict vigil on the water level.

“We are keeping a close watch on the water level, and are prepared to help the locals as and when required,” said a district official in Varanasi.

Meanwhile the Chief Minister, according to the official spokesman, has directed officials to ensure adequate assistance for people in flood-affected areas as well as cattle and other animals.

He has also directed distribution of flood relief kits to the people.