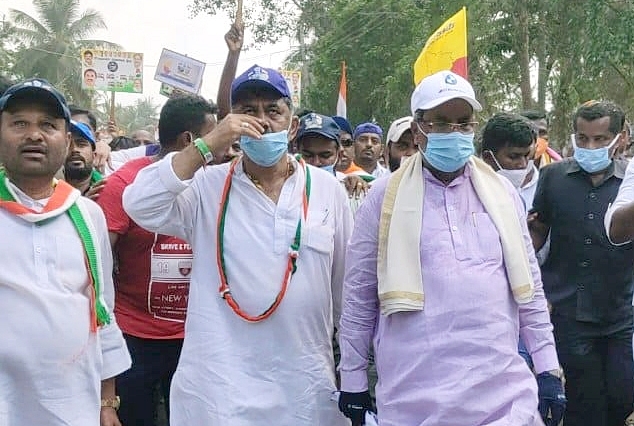 Bengaluru : The ruling BJP in Karnataka after scuttling Congress padayatra on Mekedatu is in no mood to celebrate as five days of foot march successfully provided a platform for the much awaited understanding between State Congress President D.K. Shivakumar and Opposition leader Siddaramaiah.

Shivakumar and Siddaramaiah, always vying with each other for supremacy in the affairs of the Congress party in Karnataka, have buried their hatchet for now. Further more, they are targeting the BJP more effectively.

Siddaramaiah’s poignant attacks on Prime Minister Narendra Modi and Amit Shah are well known. His recent verbal attacks on RSS have created a furore and became national news. Shivakumar on the other hand, has enraged the BJP’s central leadership and even sent to jail.

With former Chief Minister B.S. Yediyurappa being sidelined in the party, BJP Karnataka unit leadership falls short to match the aura and mass appeal of Siddaramaiah and Shivakumar, according to analysts.

Shivakumar with huge resource capabilities and with Siddaramaiah’s appeal on minorities and backward classes, Congress if puts up a united fight, it won’t be difficult to attain power in Karnataka in the upcoming assembly elections, say senior Congress leaders.

The BJP on the other hand seems to be divided and many leaders are still hopeful of being projected as the Chief Ministerial candidate for the 2023 assembly elections despite high command making it clear that next elections would be fought under the leadership of Chief Minister Basavaraj Bommai.

Former Chief Minister Jagadish Shettar who refused to be in the Bommai cabinet, openly stated that he can’t work under his junior. He is yet to be placated. Shettar is clearly maintaining distance from CM Bommai. Party sources say that all is not well between Yediyurappa and Bommai as well.

With all this, the cabinet reshuffle after the results of five states is expected to create more rift within the BJP as the talks are rife that all seniors and aged ministers would be dropped from the cabinet and Gujarat model would be adopted in the state. It is going to be a challenging situation for CM Bommai, party sources say.

Manjunath Adde, Congress Spokesperson stated that the high command has defined the roles and responsibilities of the leaders. Siddaramaiah as a Opposition leader and Shivakumar as the party President have galvanized the party. “There are clear signs in the state of Congress returning to power. The wave will only grow stronger for Congress in the coming days,” he explained.