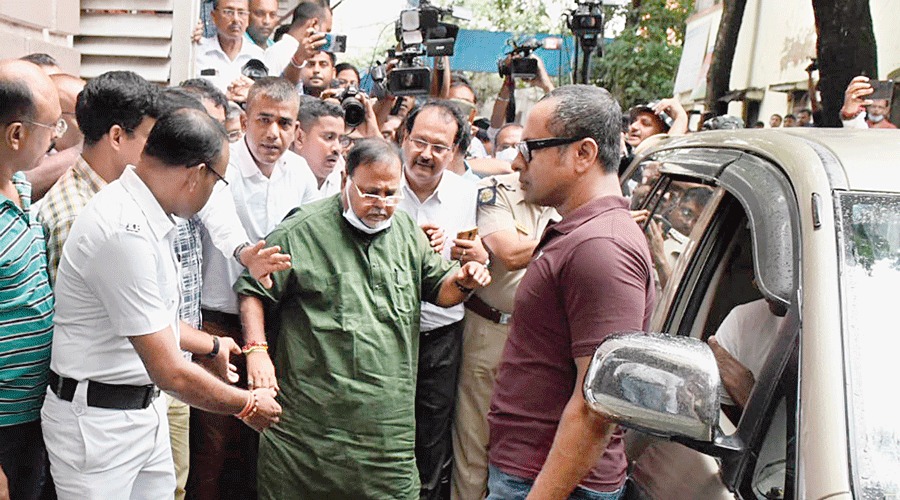 Kolkata : A team of doctors from the state-run SSKM Medical College and Hospital on Saturday contradicted the reports of AIIMS Bhubaneswar that Partha Chatterjee, the prime accused in the the multi-crore teacher recruitment scam in West Bengal, does not need hospitalisation for treatment of some of his chronic ailments.

A seven-member team from the SSKM went to the Presidency Central Correctional Home in Kolkata on Saturday, and carried out a thorough medical check-up of Chatterjee and concluded that the ailments of Chatterjee cannot be treated behind the bars.

The medical team also submitted a report on this count to the jail superintendent, advising the prison authorities that Chatterjee needs to be monitored constantly, and also issued some guidelines on this count. The medical team especially expressed concern over the problem of frequent swelling of limbs of Chatterjee.

Following a directive of Calcutta High Court issued soon after his arrest by the Enforcement Directorate (ED) last month, Chatterjee was flown to AIIMS Bhubaneswar for medical check-up. The doctors there had clearly said that Chatterjee’s chronic ailments were not that serious that he needed to be hospitalised.

However, a totally contradictory report from the medical team of SSKM on this count is apprehended to create another round of controversy in the matter.

Now the question that arises is what prompted the state health department to send the SSKM team to Presidency Jail on Saturday?

It is learnt that the doctor attached to the correctional home, Pranab Ghosh, had submitted a report to the jail superintendent, wherein he mentioned about certain complications of Chatterjee, especially the ones related to his swollen limbs and waist pain.

The jail superintendent forwarded the report to the state correctional services department, which forwarded it to the office of the Chief Medical Officer of Health (CMOH) of South 24 Parganas district, under whose jurisdiction the Presidency Central Correctional Home falls.

The CMOH then directed the SSKM to send a medical team for Chatterjee’s medical check-up in jail.