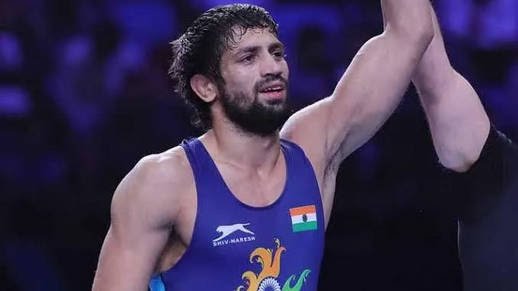 Tokyo: India’s Ravi Kumar Dahiya made a super comeback in the final round to beat Kazakhstan’s Nurislam Sanayev via fall in the men’s 57kg semifinal at the Tokyo Olympics on Wendesday.

The 23-year-old has secured a silver medal for India.

The World Championships bronze medalist from 2019 made a mark on his Olympics debut. The 23-year-old from Haryana, who trained at the iconic Chattrasal Stadium, warmed up to the Olympic Games by winning a gold medal in the Asian Championships in Almaty. In fact, Ravi won the gold in New Delhi last year as well.

Ravi Kumar was in dominant form as he began his maiden Olympic campaign on Wednesday. He won both his bouts via technical superiority to storm into the semi-final.

The 4th seed outclassed Colombia’s Tigreros Urbano (13-2) in his opener and then dominated Bulgaria’s Georgi Valentinov Vangelov (14-4) in the quarter-final.