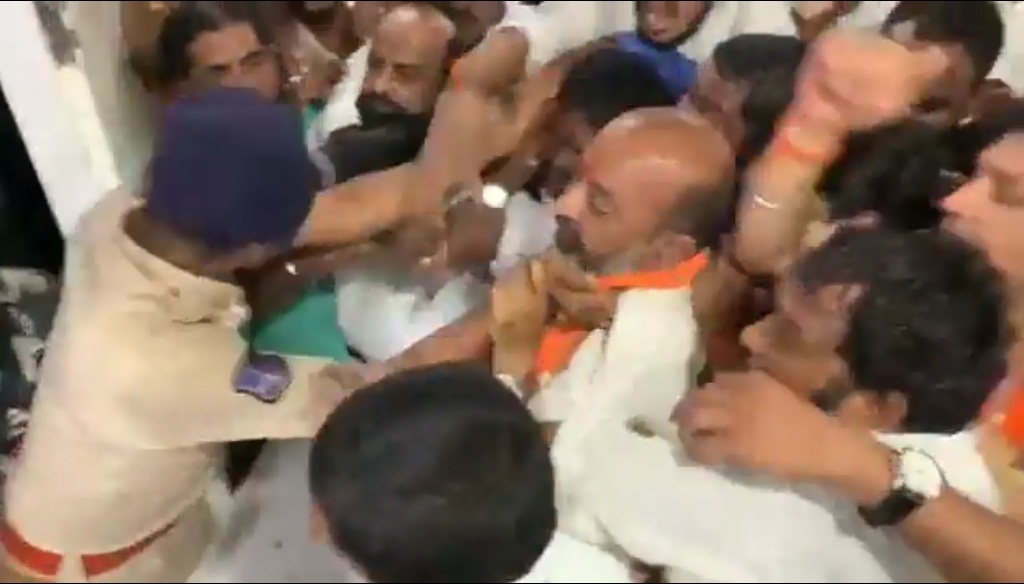 Hyderabad : A court in Telangana’s Karimnagar town on Monday sent state BJP chief and MP Bandi Sanjay Kumar to judicial custody for 14 days for attacking police personnel and violation of Disaster Management Act during a protest on Sunday night which was foiled by the police.

The magistrate dismissed the bail petition of Sanjay and remanded him and four others to judicial custody. They were all later shifted to Karimnagar jail.

Sanjay’s counsel raised objection to police booking a case under section 333 of Indian Penal Code (IPC) without following due procedure.

The police, however, defended its action and in its remand report cited 10 cases booked against the MP in the past.

Sanjay was arrested on Sunday night when police foiled his protest to demand the state government to amend an order relating to transfer of government employees and teachers.

Amid high drama and tension, the police foiled Sanjay’s ‘Jagran Deeksha’ at his camp office.

The MP, who was kept at Manakondur Police Station overnight, was on Monday shifted to Police Training Centre in Karimnagar town.

The protesters entered into an argument with the police officers. Amid the tension, police arrested the protesters.

In one case, 21 persons and some others were booked under section 51 (B) of Disaster Management Act and section 188 of Indian Penal Code (IPC) for not maintaining social distancing and for not wearing masks. He said 70 people were arrested and were released after issuing notices to them.

In another case, 16 persons and others were booked for rioting and attacking police personnel besides violation of DM Act. Five persons including Sanjay have been arrested.

The police chief said several policemen including an Assistant Commissioner of Police and a Circle Inspector were injured in the attack. He said despite repeated requests to abide by the Covid regulations which are in force, the MP and others went ahead with their programme violating rules and then resorted to rioting and attacking police personnel performing their duty.

Police had refused permission for the Karimnagar MP’s protest citing the orders in force banning meetings, rallies and other public gatherings. The party had set up a stage outside the MP’s office for the 10-hour long protest.

Sanjay, however, managed to enter into his office along with his supporters, and locked it from inside to stop police from entering the premises. High tension prevailed as the MP’s supporters threatened self-immolation if the police foil their protest.

The police personnel broke into the office. The MP and his supporters tried to resist the arrests. Police has to use the force to arrest Sanjay and 170 others and shift them to waiting police vehicles. While Sanjay was taken to Manakundur Police Station outside the town, other arrested BJP leaders and workers were shifted to other police stations.

Meanwhile, BJP leader and former minister Eatala Rajender has condemned Sanjay’s arrest. He termed the arrest as undemocratic. He said the MP was sitting on the protest peacefully in his office but the police resorted to high handedness at the instance of the state government.