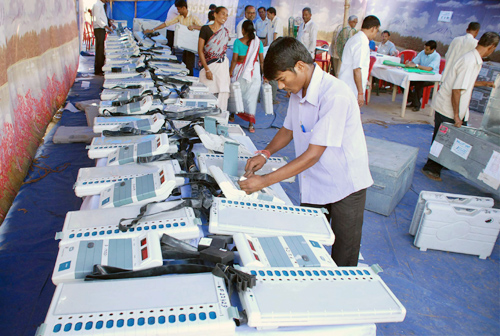 Chennai: The electoral fate of 3,998 candidates who fought in the April 6 Tamil Nadu assembly polls will be known on Sunday, the May 2.

While it will be the celebration day for the 234-successful candidates and also for the winning political party/combination, one can also hear Mayday! Mayday! Mayday! cries from some others.

As per the Election Commission of India, 72.81 per cent of the 6.29 crore voters have cast their votes in the poll.

Apart from the Assembly election results, the bypoll results for the Kanniyakumari Lok Sabha constituency will also be known on Sunday.

Be that as it may, the assembly poll results will be crucial for the ruling AIADMK government led by Chief Minister K. Palaniswami and the principal opposition party DMK led by M.K. Stalin.

While the pre-poll opinion survey and the exit polls predicted a large win for the 10 year power starved DMK, the electronic voting machines (EVM) on Sunday will spew out the secret.

While counting would begin at 8 a.m., by noon the trend will be known as to who would storm the Fort St. George, the seat of power in Tamil Nadu.

Counting of votes will be at 75 centres in the state with the deployment of state police and central para military forces for security.

Vote counting will be videographed.

With the spread of coronavirus, counting agents and others will be allowed into the counting centres on the production of Covid-19 negative test report or should have been vaccinated twice.

The assembly poll saw a five cornered contest though the main contest was between the ruling AIADMK-led alliance and the DMK-led front.

The ruling AIADMK fought in 179 seats and six other small parties each contesting in one seat under the former’s Two Leaves symbol.

A total of 187 candidates — DMK’s own and that of alliance parties — contested under the former’s Rising Sun symbol.

The Seeman-led NTK went alone contesting in all the 234 constituencies and fielding 50 per cent women candidates.

The other parties in the fray on their own are the Bahujan Samaj Party (contesting in 160 seats), Puthiya Tamizhagam (60 seats) and Republican Party of India (16 seats).

In the neighbouring Puducherry, Union Territory having just over 10 lakh voters, the fight for the 30-member Assembly was majorly between the Congress led United Progressive Alliance (UPA) consisting of Congress, DMK, CPI, VCK and an Independent and the National Democratic Alliance (NDA) comprising of All India N.R. Congress, BJP and AIADMK.

The exit polls have predicted a victory for NDA.