“The central government’s decision to allow multiple prices for vaccines is discriminatory and regressive. States must unanimously reject the decision,” Chidambaram said.

He suggested that the best way forward is for the State governments to jointly form a Price Negotiation Committee and offer to negotiate a uniform price with the two vaccine manufacturers.

“The joint purchasing power of the State governments will force the manufacturers to agree to a uniform price. States must take the initiative. The central government has abdicated its responsibility and surrendered to corporate profiteering.”

On Thursday Congress Interim President Sonia Gandhi wrote to Prime Minister Narendra Modi, alleging that the government has not learnt any lesson from the past and its vaccine policy is arbitrary and discriminatory.

In her letter to the Prime Minister, Sonia Gandhi said, “It’s surprising that despite the harsh lessons of last year and pain inflicted to our citizens, the government continues to follow an arbitrary and discriminatory policy which promises to exacerbate existing challenges.”

The Congress President said that the policy implies that the government has “abdicated” its responsibility for free vaccination to all.

She asked why the government is allowing profiteering by the companies manufacturing the vaccine in the country.

The Congress demanded that there should be free vaccination for all regardless of the economic condition and the policy should be reversed as there should be uniform pricing of the vaccine. 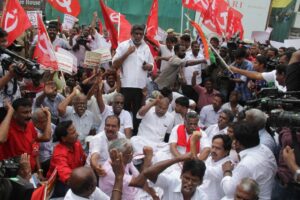