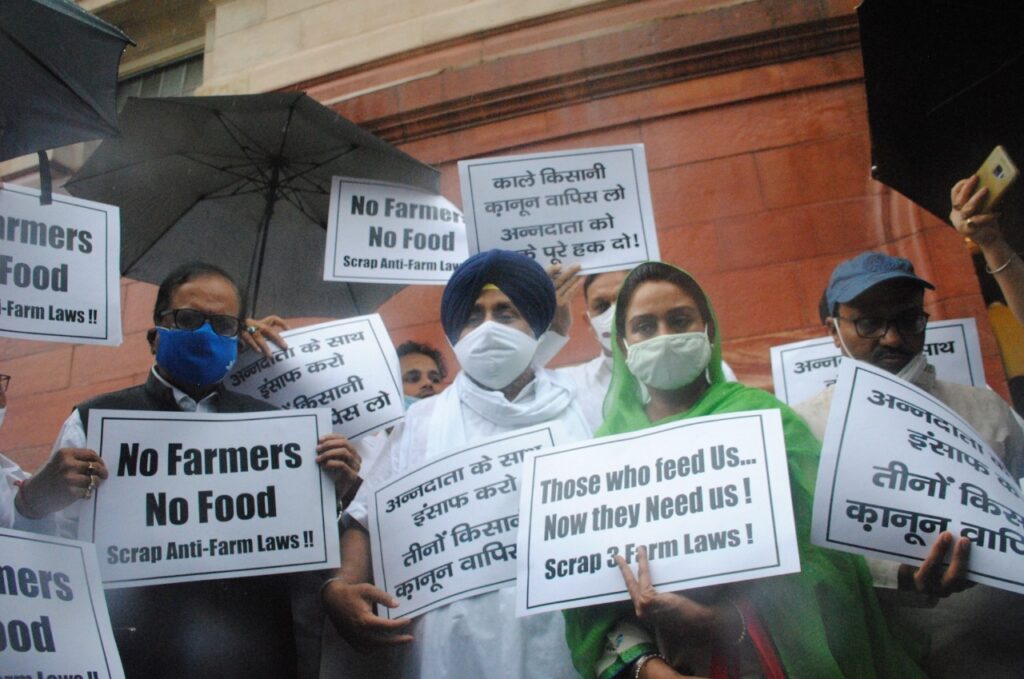 New Delhi, Shiromani Akali Dal (SAD) President Sukhbir Badal on Monday condemned the NDA government for turning down the adjournment motion moved by the party in conjunction with the Bahujan Samaj Party (BSP) and others, demanding repeal of the three agricultural laws in keeping with the sentiments of the farming community of the country.

The SAD President held a protest in this regard along with wife and former minister Harsimrat Kaur Badal and BSP MPs, including its national General Secretary Satish Chandra Mishra, outside Parliament and asserted the SAD-BSP alliance would continue to protest to demand that the demands of farmers be discussed in Parliament and duly accepted by the Union government.

Badal also urged all political parties to unite on the issue of forcing a discussion on the “black laws”.

“We must prioritise this issue. There is nothing more important than this at this moment. Farmers have been agitating for their demands for more than eight months now. More than 500 farmers have been martyred. We had even moved a resolution calling for paying tribute to the farmers who were martyred in the cause of the Kisan Andolan. It is unfortunate that obituaries were not paid to the farmers in Parliament.”

He also asked the NDA government to show sensitivity towards farmers by “acting in a responsible manner befitting an elected government”, claiming that “instead of listening to the farmers, the Union government tried to defame and repress the peaceful movement”.

“Even now no attempt is being made to talk to farmers and resolve their grievances. Such an attitude does not hold well for a democracy.”

He demanded the Union government explain why it was stonewalling the just demands of farmers, saying “this is the reason why farmers have lost faith in the government”.

Asserting that the “black laws” were pushed through Parliament in utter disregard for farmers, farm labourers and traders, Badal said the laws were also in brazen violation of the spirit of federalism as envisaged by the founding fathers of the Constitution.

He said farmers also felt that the farm laws were designed to pave the way for corporatisation of agriculture and would result in the end of the assured government purchase of food grains and throw farmers to the mercy of corporations.