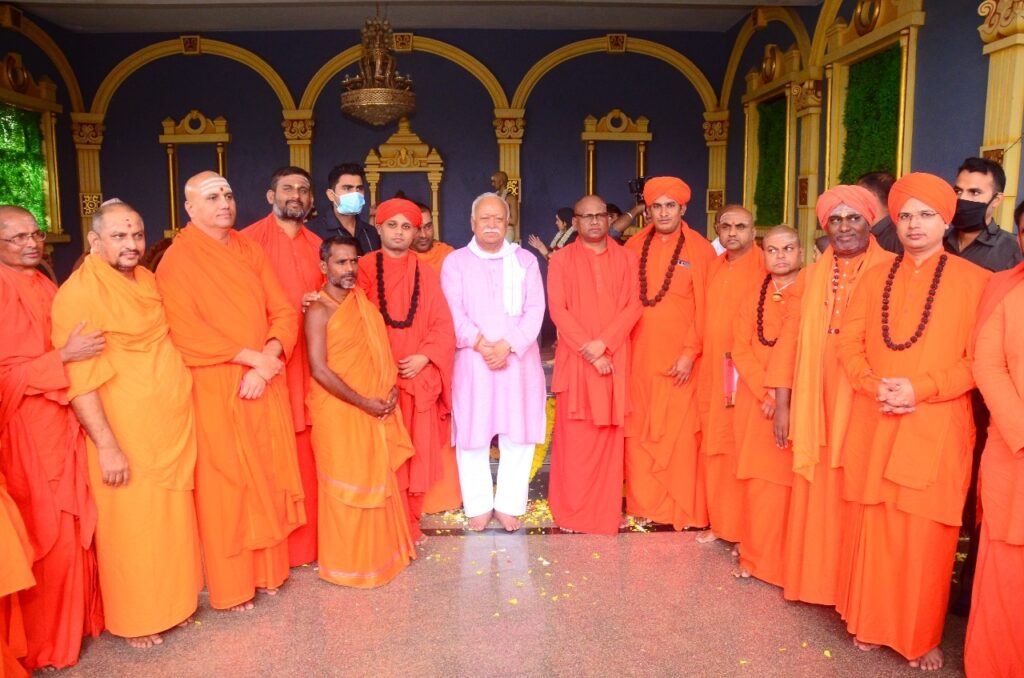 Chitradurga (Karnataka) : Rashtriya Swayamsevak Sangh (RSS) chief Mohan Bhagwat said on Tuesday that “if India is to remain as India, we have to be what we are”.

“If not, India won’t be what it is. The presence of religion must be ensured everywhere in the country,” said Bhagwat while addressing a gathering of religious seers from the Dalit community and backward classes at the Shiva Sharana Madara Chennaiah Mutt in Karnataka’s Chitradurga district.

Bhagwat also said that the Sangh relates itself with spirituality and religiousness, and that politics does not suit the outfit.

“That is why religious seers are closer to us than politicians,” he said.

“In our society, certain sections have remained backward. This happened as the connection was cut off. It is our duty to keep all sections of Hindu religion in good stead. It can be achieved only by repeated unison. This is what harmony stands for, and the Sangh is making these attempts,” the RSS chief said.

“If we meet often, mutual awareness will be more and it will ward off lack of trust and suspicion. The RSS, religious mutts and seers must come together repeatedly,” Bhagwat said.

He also said that the evils of untouchability, inequality and hatred are rooted in our minds.

“There is no problem in the religious scriptures. These evils are rooted in our minds for centuries and it will take some time to fix it. We must be patient. It is going to happen for sure and we are on it,” he said.

Bhagwat stressed that the society has to focus on etiquettes like respecting elders and women.

“The new generation has to be taught these qualities. Modern education is helping students to get educated, but they often forget about the etiquettes,” he added.

Urging the religious seers to build a society based on service and etiquettes, he said, “Whatever be the challenge, the RSS is with you. We have a way of functioning and we will do the job on that basis.”

“We are with you, not because we are an organisation but because it is our duty. That’s why make an attempt to know the Sangh… We are all part of Hinduism,” Bhagwat said.

Bhagwat’s outreach has created a buzz in the political circles of the state with Karnataka set to go to the polls next year.

Many view the RSS chief’s move as an attempt to draw backward and oppressed classes into the fold of BJP.