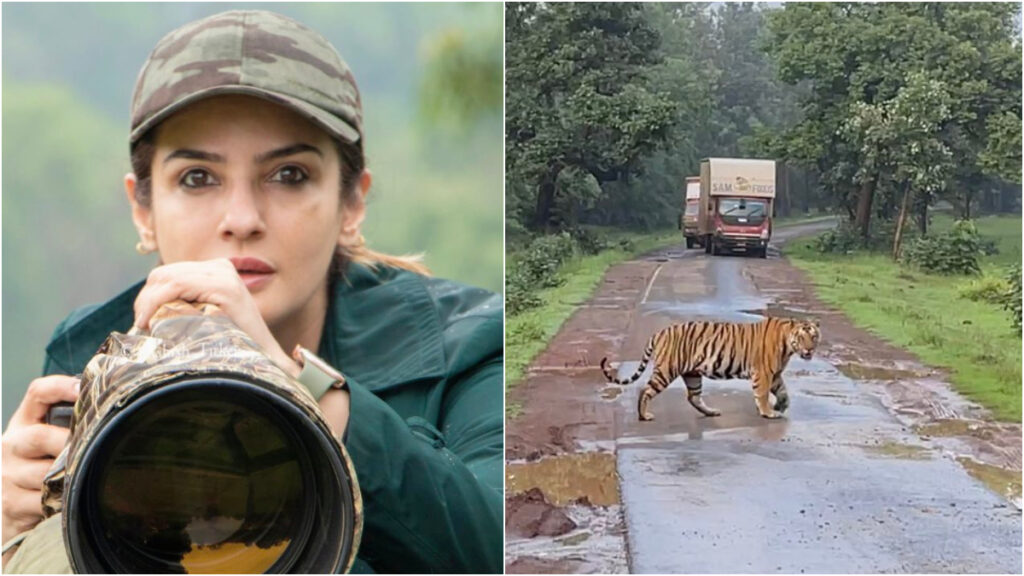 Mumbai/Bhopal : A day after the Madhya Pradesh forest department launched a probe into her November 22 tiger video in the Satpura Tiger Reserve, Bollywood actress Raveena Tandon scoffed at the boiling controversy and claimed she had done nothing wrong, here on Wednesday.

The actress said she was travelling in a jeep licensed by the Forest Department which stuck to the designated ‘tourism path’, scoffing at reports contending her vehicles driving close to a tigress in the protected areas of the reserve on November 22.

Raveena added that she was accompanied on her safari by trained guides and drivers provided by the Forest Department, who are trained to know their boundaries and legalities.

“Once can never predict when and how the tigers will react…. Luckily for us, that we did not take any sudden action, but sat quiet and watched the tigress move on,” Raveena said.

“We were on the tourism path, which mostly these tigers cross. And Katy the tigress in this video as well, is habituated to coming close to the vehicles and snarling,” she added.

Contending that tigers are the kings where they roam, they (the visitors) were ‘silent spectactors’ as any sudden movements can startle them (the big cats) also, she pointed out.

The video which went viral on the social media, shows the safari jeep purportedly near the tigress, camera shutter sounds are audible as also the tigress roaring at them in the sanctuary.

Following an uproar, the MP Forest Department authorities ordered a probe on Tuesday (November 29), and all those who were on that safari shall be questioned.

Raveena added how “close encounters of all kinds are pretty regular and uploaded by all” on social media.

“God forbid it happens to be a famous person in the vehicle. Guess whose fault is it then?” she wondered.

An ardent wildlife lover, after returning from the safari, an excited Raveena shared pictures and videos of her ‘break from work’ with her kid.

She captioned her pictures as she posted on social media with, “Back to where my heart belongs…#satpuratigerreserve #borisafarilodge @jehannumawilderness thank you for the warm hospitality. Cheers here’s to a bunch of crazies who flew in from all over for a day in the jungle @saroshlodhi @rashathadani.