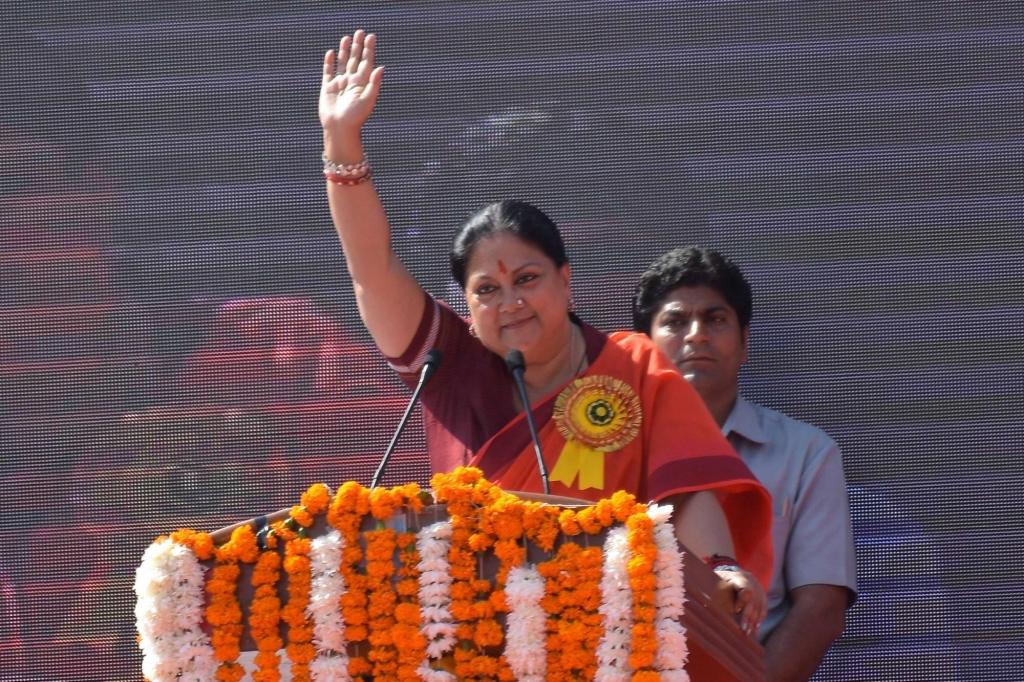 Jaipur,  The split between former Chief Minister Vasundhara Raje’s followers with the current state leadership, which was earlier limited to poster war, has now spilled out in the with open verbal clashes where her followers have openly declared ‘Raje is BJP and BJP is Raje’ in Rajasthan.

The state leadership has refused to stay silent on the remark and said that ‘no one is bigger than the party’ and speaking against party leadership is against the party and is a wrong practice.

In the last few days, Raje followers have gone super active in the state after her posters were removed from the state party headquarters. Many of them have spoken out unanimously saying that Raje is the only leader of the saffron party in the state.

Former BJP MLAs Bhavani Singh Rajawat and Prahlad Gunnel, Pratap Singh Singhvi along with former MP Bahadur Singh Koli have publicly declared Raje to be their only leader in the desert state.

In their statements they said Raje is BJP and BJP is Raje in Rajasthan.

However, state BJP chief Satish Poonia and leader of opposition Gulab Chand Kataria on Friday said “The constitution of the party is paramount, for which all our workers work day and night, no person is bigger than the party,” the duo said.

“It is necessary that the prominent people of the party, whether MLA, MP, or any office bearer should avoid unnecessary manipulations, by making such statements as it neither serves them nor is in the party’s interest,” he added.

Poonia said that the party has certain decorum and follows a constitution, according to which all of the members function.

“Every person is given an opportunity to speak on the party platform, but it is against the constitution of the party to say such things in public forums. The interest of the party is paramount for us. Even though a few workers are giving such statements for some reason on personal basis, but it doesn’t fall within the limits of the party. The party knows such people and there is no need to discuss what will happen and when will it happen, however, whatever will happen will be known in some time,” said Poonia.

Leader of Opposition Gulabchand Kataria said that, if someone thinks that “I am above the party then it is not right”.

Also, if someone quotes a person to be above the party, then also it is not right. No one should have a misunderstanding that one leader can form the government, he quipped.

During the interaction with the journalists, Kataria also directed Raje’s supporters that in the BJP, first comes the nation, then the party and the third comes the leader.A The party runs on this principle. The decorum of the party and the party itself is paramount for us, he added.

Kataria said that ‘who remain loyal to whom’ remains to be an individual decision of leaders who are giving such statements.

However, the party to which I belong takes collective decision and never an individual decision is given weightage. It will be central leadership to decide that who will be the next CM and under whom the next election shall be contested, he added.

Anybody speaking against party leadership is wrong and against the party, he added.

Raje have been over the last many months running parallel to the state leadership. She has been running Vasundhara Jan Rasoi when the party has been running Seva hi Sangathan campaign to help needy during pandemic. Also she has not been attending meetings and virtual meetings of the party.

Recently when state BJP ran a campaign against CM Gehlot’s working, she did not participate in the campaign.