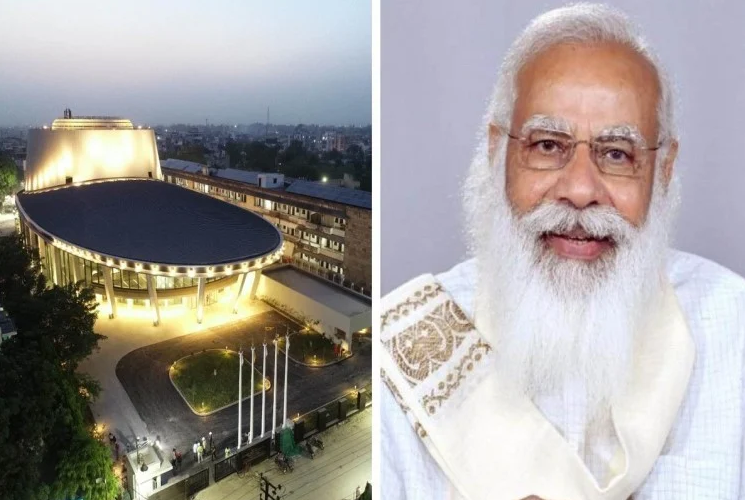 Varanasi: Prime Minister Narendra Modi on Thursday inaugurated ‘Rudraksha’, an International Cooperation and Convention Centre that offers a glimpse of the cultural richness of the ancient city of Kashi.

Constructed with Japanese assistance, the state-of-the-art centre will make Varanasi an attractive destination for conferences, thus drawing more tourists and business community to the city.

Speaking on the occasion, Prime Minister Narendra Modi said that ‘Rudraksha’ was an amalgam of Kashi’s ancient heritage as well as its modern outlook.

He said that the project was also a symbol of Indo-Japanese friendship that has stood the test of time.

The Prime Minister said that Varanasi needed a convention centre with modern amenities in view of its cultural and economic importance.

“Kavi sammelans that are a part of Kashi’s culture can be held here,” he said.

Meanwhile, as many as 108 Rudraksha have been installed at the convention centre and its roof is shaped like a Shivaling.

Officials further said that the entire building will glow with LED lights at night and will be an environment-friendly building, fit for level 3 of Green Rating for Integrated Habitat Assessment (GRIHA).

The two-storied convention centre has been built in Sigra area on 2.87 hectares of land and has a seating capacity of 1,200 people.

The officials said the project aims to provide opportunities for social and cultural interactions between people at the international convention centre in Varanasi. This is expected to strengthen the city’s competitiveness by developing its tourism sector.

It is ideal for holding international conferences, exhibitions and music concerts and other events and the gallery is done up with murals depicting Varanasi’s art, culture and music, officials said.

The VCC will be equipped with adequate security and safety systems. It will have a regular entrance, a service entrance and a separate VIP entrance, making it an ideal destination for holding all types of international events.