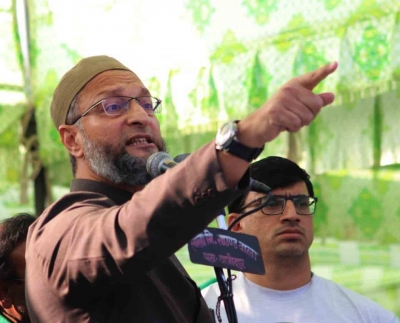 Hyderabad, Stating that that the murder of Nagraju is against Islam, the Hyderabad MP said the girl had married the man of her choice and the law of the land permits it.

Billapuram Nagaraju (25) was hacked to death in Saroornagar area on the night of May 4 in front of his wife and in full public view by her brother and his friend.

The next day, police arrested both the accused.

Nagaraju had married Ashrin Sultana, his classmate in school and college, on January 31 this year at the Arya Samaj temple in Hyderabad.

Owaisi said there was no rationale for the two men to kill her husband.

“Murder is the worst crime in Islam,” he told an Eid Milap programme at Darussalam, the headquarters of All India Majlis-e-Ittehadul Muslimeen (AIMIM), on Friday.

Stating that Majlis condemns the murder, the MP welcomed the action taken by Telangana government with the immediate arrest of the accused, adding that they should be punished.

He alleged that a section of media is trying to give the incident a communal colour and pointing fingers at him.

“Did I take out procession in support of killers, did I garland them or did I announce that I will arrange a lawyer for them?” he asked.

Owaisi pointed out that when a Muslim youth married a Hindu girl in Madhhya Pradesh, the authorities there went and demolished his father’s house and shop. He said similarly the killer of Ikhlaq and other were felicitated.

The MP also made it clear that he will decide what to speak and where and when to speak on any issue and this can’t be decided by media or others.