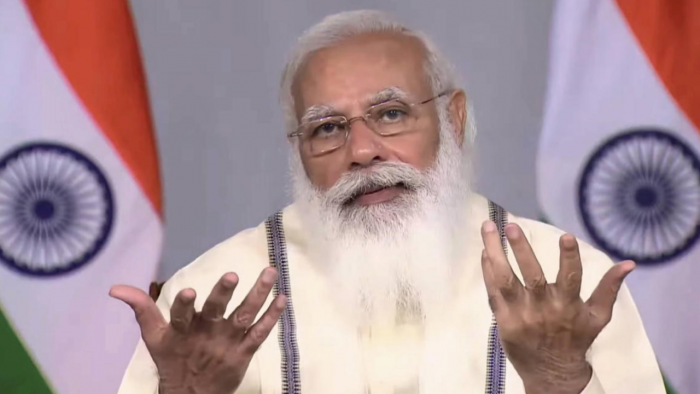 New Delhi Prime Minister Narendra Modi on Wednesday said the economic impact left by Covid-19 is huge and our planet will not be the same after the pandemic.

Delivering his keynote address on the occasion of Vesak Global Celebrations on Buddha Purnima through video conference, the Prime Minister said there have been many noteworthy improvements as well over the last year like having a better understanding of the pandemic, which strengthens our strategy to fight it and having the vaccine, which is absolutely important to save lives and defeat the virus.

The Prime Minister thanked the first responders, frontline healthcare workers, doctors, nurses and volunteers for selflessly risking their lives to serve others in need everyday. He expressed condolences to those who have suffered and lost their near and dear ones.

“A year later, Covid-19 pandemic has still not left us and several nations, including India, have experienced a second wave.” He remarked that this once in a lifetime pandemic has brought tragedy and suffering to the doorstep of many and has impacted every nation.

The Prime Minister said while fighting Covid-19, one must not lose sight of the other challenges faced by humanity like climate change.

Modi said that the reckless lifestyles of the present generation are threatening the future generations and resolved not to let our planet remain wounded. He reminded of Lord Buddha’s emphasis on a way of life where respect for Mother Nature is paramount.

The Prime Minister announced that India is among the few large economies to be on track to achieve its Paris targets. “For India, sustainable living is not only about the right words but also about the right actions.”

He appealed to the world leaders to come together in the fight against forces trying to spread hate, terror and mindless violence.

Remarking that the life of Gautama Buddha was about peace, harmony and co-existence, the Prime Minister said there are still forces today whose existence depends on spreading hate, terror and mindless violence.

“Such forces do not believe in liberal democratic principles,” the PM said and gave a call for all those who believe in humanity to come together and defeat terror and radicalisation. “Lord Buddha’s teachings and the importance given to social justice can become a global unifying force.”

Members of the Mahasangha, the Prime Ministers of Nepal and Sri Lanka, Union Ministers Prahlad Singh and Kiren Rijiju, Secretary General of International Buddhist Confederation, Venerable Doctor Dhammapiya were also at the event.

The Prime Minister said Vesak is a day to celebrate the life of Lord Buddha and to reflect on the noble ideals and sacrifices he made for the betterment of our planet.