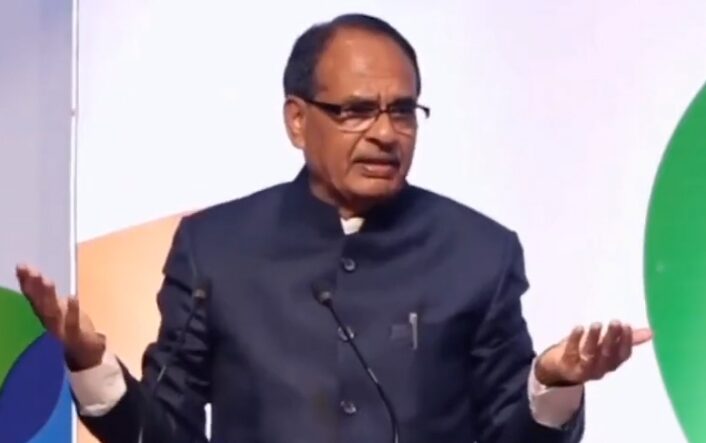 Bhopal : Madhya Pradesh Chief Minister Shivraj Singh Chouhan took to Twitter to express anguish over the abusive video against him and family at a recent Karni Sena protest in Bhopal, and said he has “no grudge against anyone’, but leaders of his BJP, on the other hand, are making headlines for using abusive language and insulting public servants publicly.

The latest incident was reported from Satna district, where a local BJP leader was seen hitting a policeman with slippers, as per a video on on social media. As per the reports, Chitrakoot police (under Satna district) had received information about illegal mining at village, and therefore, a team along with revenue officials reached the spot.

Upon reaching the village, the police team spotted a few people performing illegal mining and when they tried to stop them, locals started abusing the police team. After a few minutes, BJP leader Sadhna Patel, who also happens to be the Municipal Council president of Satna district, arrived there and she also started abusing and she beat up police personnel with slippers.

Some of her supporters were also seen arguing with the police officers, one of whom snapped back, asking, “Do you want us to take you to the police station? We will begin our investigation from there.”

However, Patel was not arrested even then for assaulting a government official.

sought a reply on this issue, a senior police official in Satna said: “They had no information about the case against her in Chitrakoot.”

that a case has been registered against Sadhna Patel and nine other people at a local police station.

Before this slipper incident, Union Minister and senior tribal leader Faggan Singh Kulaste used a highly abusive word, while slamming the erstwhile Kamal Nath-led Congress government’s 15 months period in MP. Kulaste made the abusive statement while talking to journalists on camera during a public program in his native Mandla district on Sunday.

Similarly, another senior BJP leader and former minister, Gaurishankar Bisen, who is now the state OBC Welfare Commission head, with a cabinet minister’s status, was caught on camera, addressing the local RTO in abusive language at a public hearing in Lalbarra police station of his native Balaghat district.

Bisen, who is a multi-term MLA from Balaghat, is infamous for even using indecent language publicly for his own party leader and ex-MP Bodh Singh Bhagat, used abusive language against RTO Abhinesh Gadhpale in presence of other government staff inside the police station in full public view.