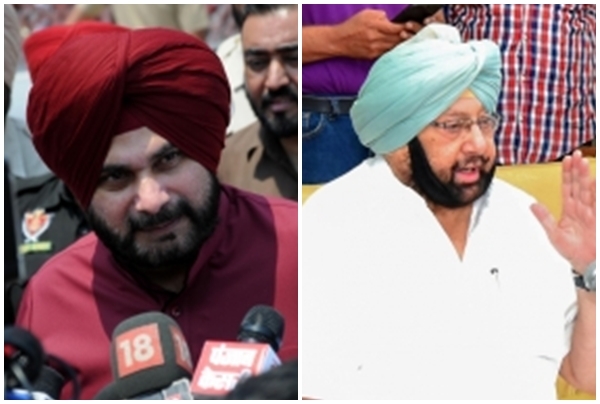 Chandigarh : Missing not an opportunity to take a jibe over the resignation of Punjab Congress chief Navjot Sidhu, former two-time Punjab Chief Minister Amarinder Singh, without naming him, described him as an unstable man.

“I told you so… he is not a stable man and not fit for the border state of Punjab,” Amarinder Singh said in a tweet just after Sidhu resigned.

Unhappy over the first expansion of Chief Minister Charanjit Singh Channi’s cabinet, Sidhu resigned from his post. But he said he would continue in the party.

Sidhu announced his resignation on his Twitter handle in just an hour after Channi announced allocation of portfolios to his Cabinet colleagues.

In a letter to party President Sonia Gandhi, he wrote, “The collapse of a man’s character stems from the compromise corner, I can never compromise on Punjab’s future and the agenda for the welfare of Punjab.”

“Therefore, I hereby resign as the President of the Punjab Pradesh Congress Committee. Will continue to serve the Congress,” he added.

It is learnt that Sidhu was upset over the non-inclusion of the MLAs of his choice in the expanded Cabinet and the appointment of new Advocate General, A.P.S. Deol.

Since his resignation as the Chief Minister, Amarinder Singh has been targeting Sidhu by saying publically that he would fight his elevation to the chief ministership tooth and nail, and is ready to make any sacrifice to save the country from such a ‘dangerous man’.

“He (Sidhu) is dangerous for the state,” said the former Chief Minister in a series of media interviews last week.