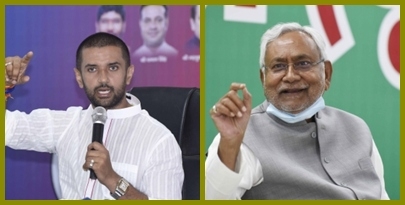 Patna : On the first death anniversary of Lok Janshakti Party (LJP) founder and former Union Minister Ram Vilas Paswan, his son and LJP Chief Chirag Paswan tried to iron out differences by inviting leaders from all parties in Patna except Chief Minister Nitish Kumar who skipped the programme.

Leaders from various parties gathered on this occasion except Nitish Kumar or any top Janata Dal (United) leader who chose to skip this event. This has fuelled speculation about the JD(U) leaders maintaining a distance from Chirag Paswan.

It is speculated that Nitish Kumar wants to maintain a distance from LJP’s Chirag Paswan under any circumstances. The big question is whether relations can turn so sour in the course of political enmity that old relations are sidelined.

Chirag’s uncle and Union Minister Pashupati Paras of LJP (Paras) faction attended this programme and paid tributes to his brother Ram Vilas Paswan. He said that even if he had not been invited, he would still have come.

Though Nitish Kumar paid tributes to Ram Vilas Paswan, he did not attend the event hosted by Chirag Paswan.

Political experts are viewing this feud from different viewpoints. Political critic Ajay Kumar says, “Even if Nitish Kumar had attended this programme, he would not have suffered any political loss but instead he would have benefited. This is the beginning of a wrong tradition in politics.”

Manoj Chaurasia, who knows the politics of Bihar from close quarters, says, “Nitish Kumar’s absence from this event gives a clear indication that he is not interested in mending ties between the JD(U) and the LJP but wants to further maintain a distance from LJP.”

He said the JD(U) became the third largest party in the 2020 Bihar Assembly elections. JD(U) leaders hold the LJP responsible for their party’s poor performance so Nitish Kumar does not seem to be in any mood to forgive LJP leader Chirag Paswan.

“JD(U) believes that Chirag’s strategy and politics are responsible for reducing the party’s position in Bihar,” says Manoj Chaurasia.

On the other hand, by attending this event, BJP leaders have expressed that even though LJP (Paras) Chief Pashupati Kumar Paras has been made a Union minister, the saffron party will continue to support Chirag Paswan as well.

Chirag has been continuously targeting Chief Minister Nitish Kumar and even alleged that the JD(U) was involved in breaking the LJP into two factions. Political experts consider this gesture as a revenge by the LJP.

The LJP has split into two factions, one led by Chirag Paswan and the other by Pashupati Paras. Both the factions claim to represent the real LJP.

Prime Minister Narendra Modi wrote a two-page letter on the first death anniversary of Ram Vilas Paswan and BJP leaders participated in the programme organized in Patna. This indicates that the BJP will remain on friendly terms with Chirag Paswan. It will be interesting to see the strategy planned by the JD(U) and LJP against each other in the coming days.