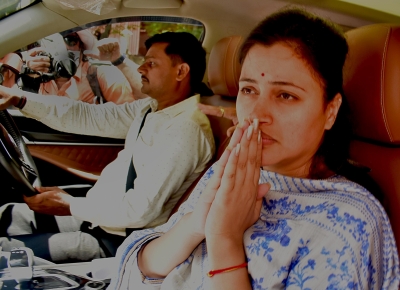 Mumbai, On Thursday Independent MP from Amravati, Navneet Kaur-Rana, was rushed to the Lilavati Hospital after she complained of back and chest pain.

Her husband and Independent MLA from Badnera in Amravati district, Ravi Rana, was also released from the Taloja jail in Raigad district on Thursday, from where he went straight to the Lilavati Hospital in Bandra where his wife is admitted.

The couple had secured conditional bail from a sessions court on Wednesday, but they could not go home the same day as the formalities were not completed.

A weary Navneet Kaur greeted the media and her supporters outside the prison with folded hands, but didn’t say anything. From there she was driven to the hospital for various tests and treatment.

Meanwhile, BJP activist Kirit Somaiya slammed the Maha Vikas Aghadi (MVA), calling it a government of Uddhav Thackeray’s ‘goons’ who ensured that Navneet Kaur spent 12 days in jail because she wanted to chant ‘Hanuman Chalisa’, and then had to be taken to the hospital.

Her lawyers said that she was suffering from high blood pressure, and chest and back pain.

The Ranas were arrested from their home on April 23 after they threatened to go to ‘Matoshri’, the private residence of Chief Minister Uddhav Thackeray in Bandra East, to chant ‘Hanuman Chalisa’.

Their plan led to massive tensions as their supporters and Shiv Sena activists prepared for a conflict even as the Mumbai Police deployed heavy security.

Though the couple later withdrew their plan in view of Prime Minister Narendra Modi’s visit to Mumbai the following day (April 24), the police slapped various charges, including sedition, on them. The couple was remanded to 14-day judicial custody.