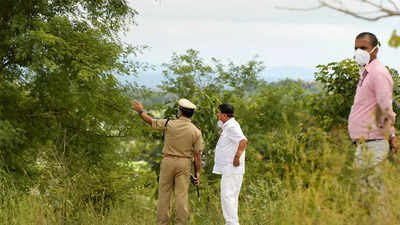 Mysuru: Karnataka DG and IGP Praveen Sood on Saturday announced that the special investigating teams probing Mysuru gang rape case have arrested five persons including a juvenile from Tiruppur district of Tamil Nadu. One accused is still absconding and the hunt is on to nab him at the earliest, he said.

The incident of gang rape had taken place in the outskirts of Mysuru at the foothills of Chamundi hill near Lalitadripura locality on August 24. The gang had assaulted the girl and had demanded Rs 3 lakh ransom. When they did not get the money, the accused had gang raped the college girl.

“The youth and the girl who were in almost unconscious state were picked up and hospitalized by the father of the boy who came to the spot in a car worrying about their safety after the call,” police sources said.

“The special teams have secured the arrest of the accused without the statement from the victim, mostly relying on the technical and scientific evidence,” Praveen Sood said.

The accused have studied up to 7 and 8 standard and some are drop outs. One of them is a juvenile. However, it is yet to be confirmed in the further investigations. The accused youths are coolies, drivers, wiremen and carpenters, said Praveen Sood.

All the accused came to Mysuru vegetable market often and consumed alcohol as well as partied before going back to their native place in Tamil Nadu. Unfortunately, they found the couple in the way and targeted them on the fateful day, he said. “They had demanded Rs 3 lakh ransom from the couple,” he added.

“It was a blind case. The investigations have to be conducted on technical and scientific evidence. ADGP (Law and Order) Pratap Reddy monitored the investigation by stationing in Mysuru for four days,” he said.

The accused have criminal background and a lot of investigation is needed to be done in the case. It is difficult to say the rape was planned. Rape is rape. We will file the charge sheet in the case as early as possible and request the court to expedite the process of convicting the accused persons, he said.

Mysuru still remains as the safest city in the country and let’s not paint it in the same brush to taint the image of the cultural capital of the state, he added.

The police department did not get any clues from the victim. “I am not blaming the victim. Whoever is in that state, they require more time to come out of the pain and mental trauma. Forensic Science Laboratory (FSL) experts are working day and night to collect scientific evidence to get conviction of the accused persons. I am confident that the victim will come forward to cooperate during trials. Detection is the first stage. We have done it. Securing conviction is the second stage, we will get it done,” he stated.

“We are in touch with the parents of the victim and we have confidence that they will cooperate,” he underlined.

Meanwhile, Home Minister Araga Jnanendra stated that, there was concern and anxiety among people after the incident. The government had directed the police department to handle the case. “I had confidence. The message should be passed on to those who indulge in such heinous acts that they won’t be spared. The police have passed a good message in this case,” he said.

“The victim has not given her statement and we cannot force her in any way. She is in shock. The victim of another gang rape case in Manipal had given statement 6 months after the incident. Our focus is now on getting the conviction,” he stated.

Meanwhile, the sources in the police department confirmed that the victim has been taken to the native state by her parents. “She is still in an utter state of shock. Four days after the incident, her condition has not improved. The legal experts and senior police officers also opined that the victim might recover in the company of her parents at native place soon,” the sources said.