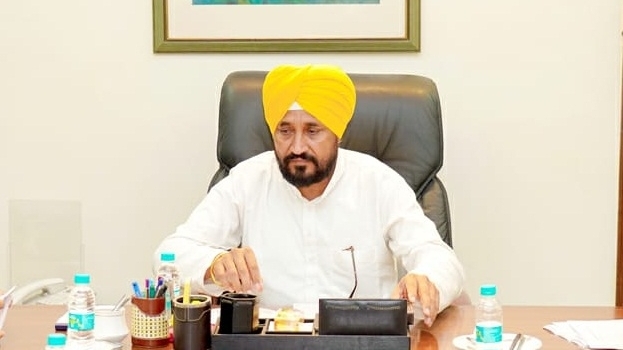 Chandigarh : A man, who is believed to be carrying explosives, was killed and five others were injured in a suspected IED blast in the district court complex in Ludhiana on Thursday, Punjab Chief Minister Charanjit Channi said.

The state has been put on high alert after the blast. It is learnt that the Home Ministry has sought a report from the Punjab government on the incident.

Channi, who reached the spot to assess the situation along with Home Minister Sukhjinder Randhawa and other Cabinet colleagues, told the media that such incidents have seen a rise after the government tightened its noose against the drug traffickers.

Channi, who smelt a plot before the Assembly elections slated early next year, also called it a ‘conspiracy’ by those trying to polarise the voters.

The blast took place at around 12:22 pm in a washroom on the second floor of the court complex when the court was functioning. The court is located close to the district commissioner’s office.

Putting the state on alert after the incident, DGP Siddharth Chattopadhyaya said, “We cannot comment on anything. Only the experts can tell the kind of explosives used, but the district, state, and central forensic agencies are on it. Every crowded place is on alert, the public should also be careful.”

Condemning the incident, Channi said inimical forces seeking to vitiate the peaceful atmosphere of the state would never succeed in their nefarious designs.

“Everybody knows the timing and the handiwork of these forces as the Assembly polls are drawing near and they are hell-bent upon hatching such conspiracies to disturb the hard-earned peace and harmony in the state. It is the need of the hour to condemn such incidents in the harshest possible words by one and all.”

Ludiana Police Commissioner Gurpreet Bhullar told the media that the explosion might have been executed by a human bomb.

“Though not confirmed, the person whose body is inside and is yet to be identified was either carrying the bomb or was very close to the spot… We are investigating the matter,” Bhullar said.

Not many people were present in the court complex at the time of the explosion owing to a strike by lawyers.

The court complex was cordoned off by the police and later vacated. The intensity of the blast was so huge that it damaged nearby walls and shattered window panes.

Meanwhile, former Punjab Chief Minister Amarinder Singh said the police must get to the bottom of the case.

“Disturbing news of a blast at Ludhiana court complex. Saddened to know about the demise of two individuals. Praying for the recovery of those injured. Punjab Police must get to the bottom of this,” Amarinder Singh tweeted.

“There is a pattern, earlier sacrilege and now a blast. There is an effort to disturb peace in Punjab, but we should wait for the probe. Security lapse will also be probed. How did the person who planted the explosive enter the court building,” he asked.

Directing police authorities to carry on a detailed investigation to get to the bottom of the incident, Channi reiterated his commitment to book the perpetrators of the heinous crime and give them exemplary punishment as a deterrent for others not to commit such crime in the future.

Channi said any such attempt to disturb the law and order situation would be dealt with sternly.

Recalling the recent incident of ‘sacrilege’ at Golden Temple and now the bomb blast in the Ludhiana court complex, he said all these indicate that several forces are actively involved to create disturbances in the border state for their vested interests.

He said the people of Punjab must remain vigilant to curb the unholy designs of such forces.

Channi said the state government would soon give a befitting reply to such anti-social forces, adding that these would not be allowed to create a bogey of terror to traumatise the innocent people in the wake of forthcoming Assembly elections.

Deputy Chief Minister Sukhjinder Singh Randhawa said, “Ours is a border state, so we cannot rule out anything, including the possibility of external forces, as they never want Punjab to be stable; the whole state is on high alert.”