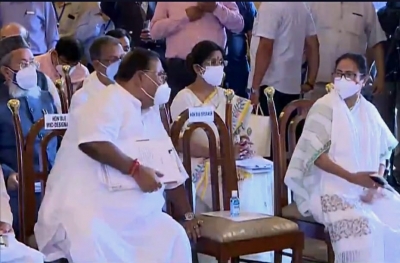 While three ministers Amit Mitra, Bratya Basu and Rathin Ghosh took their oath virtually. The rest — 40 ministers were divided into three groups — Cabinet, MOS (Independent Charge) and MoS and they took their oath together to cut short the program.

Mitra has not been well for a long time and the other two ministers have Covid.

Banerjee kept with herself important departments like Home and Hill Affairs, Health and Family Welfare, Information and Cultural Affairs, Land and Land Reforms and Refugee Rehabilitation.

The chief minister will also take care of North Bengal.

As expected, Amit Mitra was given the responsibility of Finance but his other department Commerce and Industries was given to former Education Minister Partha Chatterjee. Chatterjee will also hold the portfolio of IT and Parliamentary Affairs.

On the other hand, Bratya Basu who was handling IT is now given the responsibility of the School and Higher Education Department. Mitra is physically not well and didn’t contest the election but he was brought back by the chief minister so that he could continue to handle finance.

Though most of the former ministers retain their department but former Urban Development minister and former Mayor Firhad Hakim will be holding the portfolio of Transport and Housing. Earlier the state Transport Department was with Suvendu Adhikari who left TMC and joined BJP before the election.

Adhikari who won from Nandigram defeating the chief minister in a closely fought battle will be the Leader of Opposition in the Assembly.

Interestingly enough three most powerful ministers in the last cabinet Arrop Biswas, Jyotipriya Mullivk and Sovondeb Chattopadhyay have been given relatively insignificant portfolios.

Mullick, who was in charge of the Food Department last time, has been given the responsibility of Forest and non-conventional energy.

The Food and Supply department has been given to Pulok Roy, who is new in the ministry.

Similarly, Mamata’s close aide and loyal for long time Sovondeb Chattopadhyay has been transferred from Power to Agriculture and Aroop Biswas, who is one of the most trusted of the chief minister has been given the portfolio of Power. Biswas was the PWD minister that has not been allotted yet.

Chandrima Bhatacharya — one of the most trusted of the chief minister has been made MoS with independent charge but she has been given the responsibility of several departments like Urban Development and Municipal Affairs and will be working as MoS in several departments that are held by Mamata Banerjee like Health and Family Welfare, Land and Land Reforms and Refugee Rehabilitation. It is likely that she will become one of the key ministers in this ministry.

There are some new faces who will be working as ministers of state with independent charge and that include a former IPS Officer who has been asked to handle the Technical Education Department.

Ratna De Nag will be handling Environment, Science and Technology, Sandhyarani Tudu has been allotted the Western Region Development department and Akhil Giri has been given the department of fisheries.