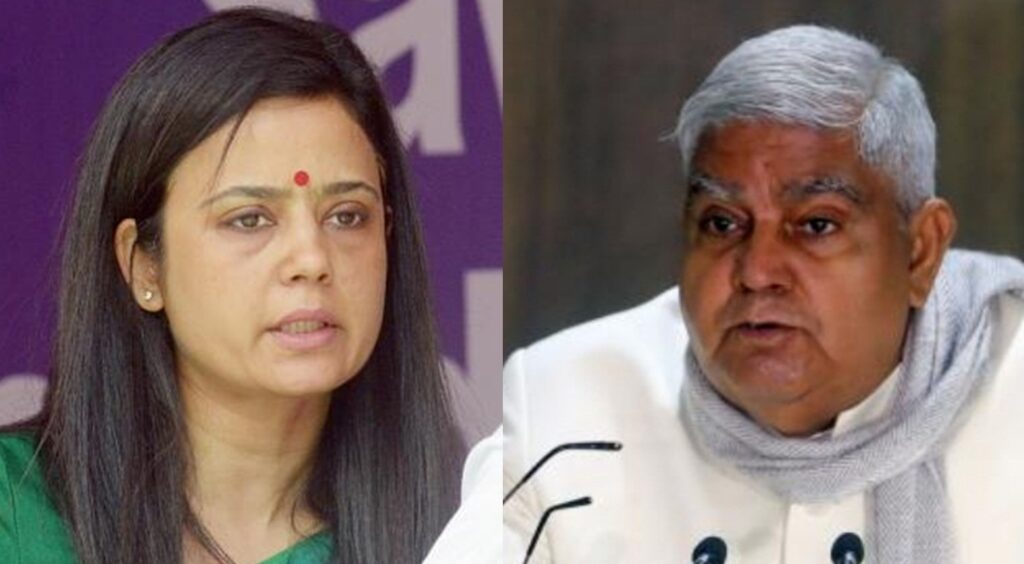 Responding to BJP state general secretary Sayantan Basu’s allegations that Maitra had furnished a ‘pack of lies’ while dishing out a list of six Officers on Special Duty (OSD) appointed by the Governor, Mahua Maitra said: “Why is BJP rising to his defence? Is he a BJP functionary or a Governor? Can’t he defend himself?”

Mahua Maitra challenged Jagdeep Dhankar to take her to court over her remarks and tweets on the issue.

“I dare him to sue me for defamation,” Maitra said.

She told journalists that if the BJP had won, the state would be full of such appointments from other parts of the country.

“We in Bengal are not parochial, but someone who gets a job here should be worth it. He or she should not get it just because they have a saffron uncle here to do their bidding,” Maitra said.

She said Bengal taxpayers should not be asked to foot the bill for the OSDs appointed by Governor Dhankar at Kolkata Raj Bhavan.

“Having failed to deliver Bengal to the BJP, Uncleji (Dhankar) must seek out a job in Delhi. He is running around raising hell over the state’s law and order, so BJP should rehabilitate him somewhere, she said, quipping: “Dont forget to take your extended family with you.”

Mahua Maitra also lampooned BJP leaders “who have the temerity to castigate Bengal voters for rejecting the saffron brigade”.

“You guys have the audacity to question a popular verdict, you think Bengalis don’t know what is good for them,” said Maitra, who has emerged as India’s one of most noticed parliamentarians.

“We did not question Indian voters when they elected BJP to power. It is for them to judge whether the BJP government has totally failed or not. We rest our case with voters and hope they see the obvious and vote in future elections,” she said.

Maitra said she was shocked by a statement of a RSS functionary likening Hindus to frogs.

“Are they out of their minds,” she asked.

Rajesh Srivastava, the RSS intellectual cell president of the West Bengal unit, has compared Hindu community with frogs and said it can be extremely difficult to evaluate them on one scale (weighing machine).

This remark was made by him during a virtual discussion organised by the election cell of the Bihar unit of BJP under the chairmanship of Radhika Raman on Sunday. The theme of the discussion was violence and democratic threat that arose after the West Bengal election.

“The Hindu community behaves like a frog and its evaluation on one weighing machine is extremely difficult,” Srivastava said while quoting this statement made by former RSS chief late Keshav Baliram Hedgewar.

“Mamata Banerjee and some extremists have united the Muslim community and is doing conspiracy to separate chicken from the neck. We have to foil their conspiracy,” Srivastava said.

Maitra said Bengalis see themselves as Bengalis and Indians and not as Hindus or Muslims.

“The BJP failed to see this and kept flaunting their religious binary which backfired on them,” she said.

“You guys have your chintan sabhas, dont you evaluate your mistakes honestly,” she asked, quipping: “Do you forget what Gokhale said.”

Maitra said the BJP defeat in Bengal, after the huge effort they put in, might turn out to be a ‘watershed.’