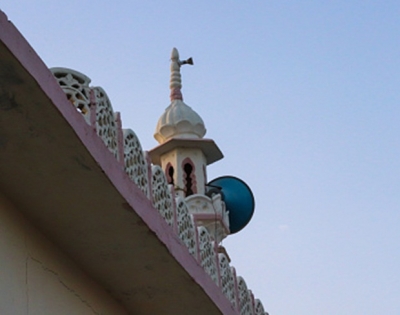 Mumbai,  The Maharashtra Navnirman Sena workers launched their campaign to play ‘Hanuman Chalisa’ outside certain mosques in Mumbai and other parts of the state where ‘azan’ was relayed on loudspeakers, here on Wednesday morning.

In places like Kandivali in Mumbai, pockets of Thane, Pune and Nashik, some MNS workers were seen playing Hanuman Chalisa on portable loudspeakers as ‘azan’ was heard on local mosques, though at low decibels.

Police have deployed tight security in Mumbai and rest of Maharashtra, aided by over 30,000 Home Guards, QRT and other units, and there have been no reports of any untoward incidents so far.

Mumbai Police Commissioner personally went around some sensitive spots in Dharavi and south Mumbai to oversee the security arrangements and deter MNS workers from creating any law and order issues.

The MNS leaders referred to the Supreme Court guidelines prohibiting use of loudspeakers between 10 p.m. – 6 a.m. and said that their campaign will continue as announced before.

Party Spokesperson Sandip Deshpande said that the activists are ready to face action — “Let the police do their job, we will do our jobs” — as police continued to round up MNS workers from Mumbai and other areas in the state.

Late on Tuesday night, MNS President Raj Thackeray had issued an appeal to all Hindus to blare out ‘Hanuman Chalisa’ outside any mosque using loudspeakers and not disturb those masjids which have already stopped using the public address systems.

Raj is likely to address the media later this afternoon to announce his further course of action in the matter as the civic elections are round the corner.

Meanwhile, the Maha Vikas Aghadi (MVA) government ministers and officials reviewed the current situation and chalked out the future plans as the MNS remained adamant on its agitation despite all preventive measures.