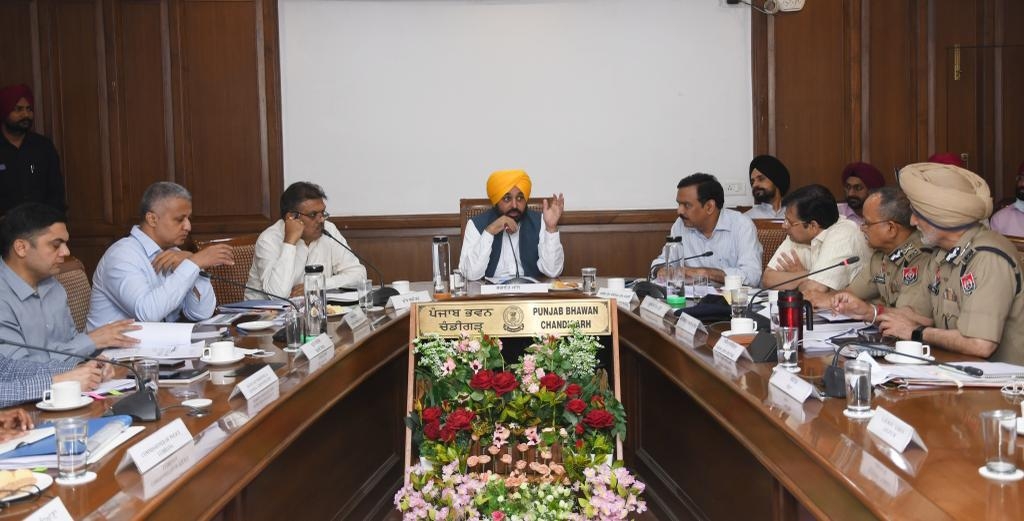 Chandigarh : In a bid to combat the menace of drugs, Punjab Chief Minister Bhagwant Mann on Thursday directed the police officers to act in tandem with the Special Task Force (STF) to launch joint operations to nab the big sharks running drug mafia.

Addressing a high-level meeting here, the Chief Minister categorically said in case any incident of drug supply comes to his notice from any part of the state, then the concerned Senior Superintendent of Police (SSP) or the Commissioner of Police (CP) would be held solely accountable.

The Chief Minister also asked the police officers to immediately swing into action in case someone lodges any complaint about drug trafficking. He said no laxity would be tolerated for eradication of drug at any cost as its supply chain would have to be broken to save our youth who had fallen prey to drugs.

Emphasising the need to tightening the noose around the drug smugglers across the state, the Chief Minister said strict action would be taken in case of default bail due to non-presentation of challan in the stipulated mandatory period, particularly in cases of commercial recovery.

Showing zero tolerance for those who are in hand in glove with the drug peddlers, the Chief Minister underlined the need to evolve an effective mechanism to punish the erring police officials who were giving patronage to the drug peddlers.

The Chief Minister also directed the DGP to issue detailed guidelines to all the SSPs not to disclose the price of drugs seized during recovery in the international market as this practice attracts the innocent people to make quick buck.

He, however, said rest of the information regarding quantity seized, location of recovery and the details of accused could be made public.

Underscoring the need, Mann asked the Health and Police departments to work in close coordination with a focus to adopt reformist approach towards petty offenders.

He also asked the DGP to strengthen the investigation mechanism also so that an exemplary punishment could be handed down to the guilty involved in drug mafia at the earliest.

He said this step would go a long way as deterrent for others to desist from selling drugs in future.

The Chief Minister also asked the DGP to speed up the process for confiscation of properties belonging to those involved in drug mafia.

Showing concern over tardy pace in this regard, Mann asked the DGP to personally monitor the progress of confiscated properties every month and keep him updated accordingly.

Condemning the trend of gun culture and gangsterism being promoted by the Punjabi singers in the larger public interest, Mann urged them to desist from fanning violence, hatred and animosity in society through their songs.

He called upon them to follow the ethos of ‘Punjab, Punjabi and Punjabiyat’, thereby strengthening the bonds of brotherhood, peace and harmony instead of fuelling anti-social activities through such songs.